GORDON Brown has taken personal charge of the escalating Nintendo Wii crisis which could force millions of British children to play outdoors with real friends this Christmas.

Mr Brown last night dramatically quit his own game of The Legend of Zelda: Twilight Princess to chair a meeting of the Cobra emergency committee, even though he was already in the mine under Death Mountain and well on his way to Fire Temple.

It is the first time a British prime minister has intervened in a toy crisis since 1985, when Margaret Thatcher fought a year-long battle with Arthur Scargill to ensure no child went without a Transformer on Christmas Day.

Mr Brown pledged his government would use all of its special powers to defeat the evil forces ranged against it so that even poor children could point an electric stick at the television.

He said: “As a young boy growing up in Scotland I saw the social divide that is caused by gift inequalities.

“I saw rich children on spacehoppers bounce repeatedly on poor children. I saw one boy bounced on so bad his Clackers split in two.”

But anti-Wii campaigners are urging parents to throw their children into the street.

Denys Hatton, of Wii Concern, said: “You could shell out the best part of £200 so your children can play virtual tennis while pointing a stick at the telly. Or you could just buy them A FUCKING TENNIS RACQUET.”

Flapping Your Gums All Day Is Not Exercise, Women Told 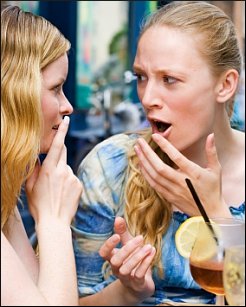 For years thousands of women have claimed to follow a strict regime based on walking to a bar, picking up a heavy glass of white wine and then sitting down with a friend and flapping their indestructible gums without pause for breath.

But now doctors have warned that talking about the size of your buttocks for two hours is not the same as going for a jog.

Dr Tom Logan, head of buttocks at the Institute for Fitness, said: "Obesity is now the number one cause of conversation in the EU and North America.

"Since the mid-1990s the driving purpose of Western society has been to facilitate discussions between women about how fat or thin they currently feel.

"All television programming and advertising is designed to either sell something related to female self-image or to kick start a conversation about thighs.

"We recommend that women find a window between chats so they can actually get off their arses and do something about it instead of just talking and talking and talking until I develop an irresistible urge to get in my car and drive off a fucking bridge."