THE mysterious substance which makes up 90 percent of the universe may be able to destroy Uri Geller, scientists have claimed.

Researchers working in underground laboratories have conducted preliminary tests with dark matter and believe it could be used to remove the Israeli spoon-bender from the space-time continuum.

Professor Henry Brubaker, of the Institute for Studies, said: "We put a little bit of the dark matter on the end of a Kettle chip and fed it to a mouse .

"It staggered about, made a noise like a constipated Harold Bishop and then disappeared into a whirling vortex like the ship at the end of Event Horizon."

He added: "At first we discussed how we could harness this incredible power and use it for good – maybe create a source of clean, unlimited energy or a new way of comparing insurance quotes.

"But then I thought 'fuck that', let's just slip some into Uri Geller's yoghurt."

However, physicists have warned the fabric of space could unravel if dark matter is used to extinguish a git of Geller's volume and density.

Professor Joanna Kramer, of Reading University, said: "All life would cease to exist in a single split second, every single galaxy, star and planet would be crushed down to an object the size of a pomegranate.

"Then again, no fucknuts claiming he made their watch go all wonky. I just can't decide." 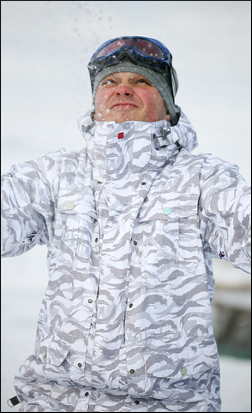 Team captain Smatta Fanishuk said: "The girls have worked on their in-line byuutobarg for four years, only to double skrnatarg as soon as the whistle was blown.

"But we are delighted for Rinsu. He has been skjording since he was old enough to strap on a pair of kraunterappartongs."

Asbjorn Aasgjaraaadbye was stripped of his gold after breaking the world record in Endurance Husky Freggling with an incredible average of 8.72 hounds per kilometre.

But depsite Aasgjaraaadbye-gate the organisers insist the games have got off to a strong start with large audiences attending the Women's Postjal Sulkvig 5000 and the much anticipated semi-final of donkeys on ice.