FACEBOOK users have complained embarrassingly about horrible things they forgot they said three years ago.

Millions of users attacked the social network for publishing ‘private’ messages from 2009 before Facebook pointed out they were old public messages leading millions of users to say ‘oh fuck, you’re right’.

Roy Hobbs, from Doncaster, said: “I had no idea that black or Jewish people were allowed to use Facebook so as far as I was concerned my ‘Manifesto for a Happy Earth’ may as well have been private. Since then my views have changed and I now realise that everything bad is caused by fat people and homos.”

Helen Archer, from Peterborough, added: “When I announced in 2009 that I like to fondle myself in the bath while looking at a photo of Donald Trump, I had no idea I would forget that I had said it. I now want to put this unfortunate episode behind me so I can concentrate on stalking my neighbour’s 14 year-old son.”

Ahmedinajad says something nice for a change 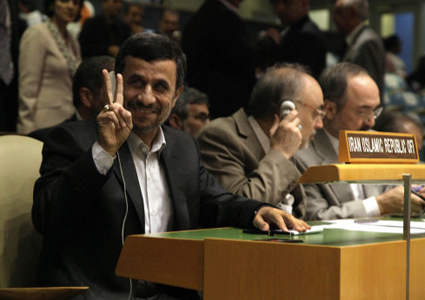 THE Iranian president has recommended a funny Jennifer Aniston comedy he watched on Netflix.

After a week in the US railing against homosexuals and Western imperialists, Mahmoud Ahmadinajad lightened the tone of his UN address by discussing the quirky romantic comedy Along Came Polly.

He said: “She plays this ditzy kind of girl who’s got a ferret. She meets Ben Stiller, who’s like this neurotic office worker and there’s an unlikely chemistry.

“There’s some funny scenes and the ferret gets up to all manner of antics, but it’s touching too. It’s not like the best film ever, but definitely worth a look.