A 42 year-old man from Glasgow claims to have discovered a full-proof way to recreate an out-of-body experience for less than a tenner.

Bill Mackay insisted he used tried and tested scientific methods to engineer the mysterious mental state experienced by an estimated one in 10 people.

Mackay said: "I take the tenner and swap it for three litres of Gaymers Old English and a bottle of Cinzano Bianco. I then drink them as fast as I possibly can on an empty stomach.

"Within minutes I feel like I am flying high above the streets of Glasgow and everyone looks like ants or maybe aunts – at that point I'm not a hundred percent sure.

"I then look down and can see myself trying to start a conversation about dogs and cats. Or, failing that, a fist fight."

Mackay's research has confounded academics at University College London, who have been conducting a major investigation into the phenomenon.

A UCL spokesman said: "I kind of wish we hadn't spent three years and the best part of £250,000 attaching electrodes to people's privates."

Mackay added: "Some people say this is what it feels like to be dead. I don't know about that, but I do know that dogs are more intelligent than cats. Are you saying different? Are you? I'll knock that fucking smile off your face, you cat-loving bastard."

Big Brother Housemates Rise To Over 200 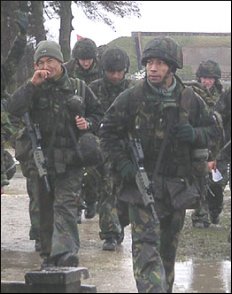 SIXTY-FIVE new housemates, including a platoon of Gurkhas, were introduced into Big Brother last night, swelling numbers in the show for its tense final week to over 200.

Around 97 new contestants joined the house in the previous seven days while another 42 were evicted. Six died of natural causes, 11 committed suicide and four have simply disappeared, although the fear is they have been eaten.

A further 19 died in a violent factional struggle provoked by Big Brother on Tuesday, while two were killed in a knife throwing accident during a dangerous 'circus skills' task, which also led to one housemate being hospitalised with lion bites.

Jaz Jankel, series producer, denied the show had lost momentum because of the constant changes in personnel, which even led to one housemate, Pudding, being ejected and restored 17 times before she was ripped apart by an angry mob during her last eviction night.

However, he admitted that no one knew for certain who was in the house anymore, or even whether any of the original occupants were still alive, but then promised “a great final week”.

He said: “The Gurkhas are some of the most feared fighting men in the British army. If they can’t finish off the rest of these pathetic fuckers and end this misery for ever, no one can.”