INTERNET debates can be won by simply inventing evidence, it has been confirmed.

Roy Hobbs, from Hatfield, revealed he had won arguments about immigration, climate change and whether dogs feel pain by using nothing more than total lies.

He said: “I was losing an argument about the death penalty when I suddenly, to my own surprise, claimed that studies had shown 72 per cent of those wrongfully convicted of murder later admitted they’d done it after all.

“It completely worked. And in my next argument, about feminism, I found myself arguing that Germaine Greer had been found to be in the employ of the Soviet Union since 1968.

“I was asked for evidence and just provided random links to adverts on Auto Trader that my opponents couldn’t be bothered to check.

“I don’t know why nobody thought of this before.”

Hobbs’ online foe Norman Steele said: “You know he can’t even leave his own house because of a patchwork of restraining orders against him by neighbours?” 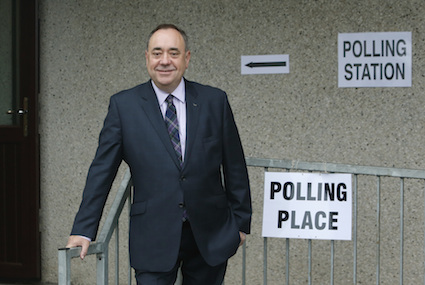 ALEX Salmond has voted ‘No’ to Scottish independence.

The SNP leader cast his ballot this morning near his constituency home and then emerged from the polling station and gave a ‘thumbs up’ to the media.

When asked how he voted, Mr Salmond said: “I voted ‘no’ actually. Last minute change of heart, I suppose.

“The idea of independence is quite exciting, but at some point over the last couple of days I just thought, ‘it seems like a lot of bother’.”

He added: “I’m also a wee bit worried about my pension.”