APPLE’S latest smartphone has extreme right-wing views caused by racist technology, it has been claimed.

The iPhone 4s’s unique selling point is that it ‘talks’ via built-in personality, Siri, which should respond to voice commands with helpful, intelligent suggestions.

However, due to a factory mix-up of character chips Siri has the disposition of a foul-tempered octogenarian grandmother who blames immigrants for everything from all crime throughout history to the current lack of George Formby films.

iPhone 4s owner Tom Logan said: “I asked my phone for the nearest kebab house, and it said in a crotchety tone ‘do you mean roast dinner?’

“I repeated my command and it replied ‘because you don’t want to eat that foreign shite’.”

“You can imagine my surprise when it directed me to a flat-roofed pub with three rottweilers in the garden. It turns out there was a BNP meeting in the skittle alley.

“I asked my phone why it had taken me there and it said ‘because Enoch was right’.”

Apple fan Stephen Malley said: “I thought the Apple ethos was using technology to bring people together, rather than perpetuate a hate-filled agenda.

“However as a devotee I am happy to think whatever the company tells me to. If that means buying a stocky dog and persecuting people, so be it.”

An Apple spokesman said: “We apologise unreservedly for this entirely inadvertent error.

“Anyone with a racist iPhone 4s is invited to their nearest Apple store where we will swap it for a device that appreciates hummus, niche theatre and will alert you to any interesting Channel 4 documentaries about blood diamonds.”

Woman to explain why she had sex with Clarkson 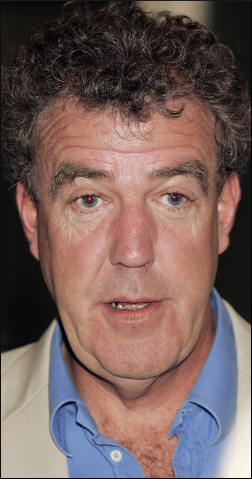 BRITAIN is today awaiting the explanation of a Jeremy Clarkson sex partner.

The Top Gear oaf dropped an injunction against ex-wife Alex Hall, clearing the way for her to somehow rationalise her behaviour.

Experts say the explanation will be especially interesting as Ms Hall left Clarkson and had therefore already acknowledged the disadvantages of having intercourse with him.

Dr Helen Archer, who specialises in the psychology of having coitus with men who wear sports jackets and jeans, said: “Often in these cases, the sex happens by accident.

“You will be walking along the road and a man wearing a sports jacket and jeans will be coming in the other direction, his head buried deep in a copy of What Car?.

“He doesn’t see you, there’s a tumbling mess of elbows and thighs and before you know it his penis is inside you.”

She added: “That said, some women are attracted to men who dress like that. They usually do PR for property development companies and have names like ‘Victoria’ or ‘Katie’.”

Archer said that as Hall had already been entered by Clarkson then either she really needs to look where she is going, there is a large sum of money involved or she is a storm-tossed sea of hideous self-loathing.

Meanwhile, an angry Clarkson has dismissed High Court injunctions as being about as much use as a disabled Mexican.