Scientists showed 100 men pictures of two ladies in red and blue dresses and 98% said they would sleep with either, although they would prefer the red one as it was likely to be dirtier.

The remaining 2% said they would sleep with both of them together so they could watch them do things to each other that they had so far only seen on DVD.

Henry Brubaker, of the Institute for Studies, said: "The men were asked three questions: 'is she pretty?', 'would you kiss her?' and 'would you put it in her even if she was asleep?'

Brubaker continued: "We then showed them pictures of large breasted and small breasted women. Christ, do you really need me to finish this?

"There was an argument about whether anything over a good handful was a waste, but that was it. It really was very depressing."

Research assistant Rebecca Hayes said men were driven by primal instincts that associated red with sex, and an overwhelming desire to insert their penis into anything female and alive.

Insane Clerics To Use Conference Calls 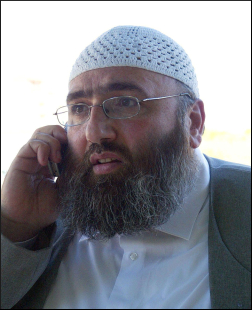 As home secretary Jacqui Smith pledged to bar extremists from the UK, dozens of unhinged Islamic preachers said it was not a problem and they could just do it over the phone.

Omar Bakri Mohammed, banned in the UK since 2005, said: "BT's MeetMe service is very reliable. I have often used it to call for the beheading of women who wear knee-length shorts."

He added: "It allows up to 20 lunatics to take part simply by dialling into a 'meeting room' number and there are many interactive features to enhance the level of swivel-eyed participation."

Bakri said in the last three years he had been able to call for the murder of homsexuals and Jews while saving thousands of pounds on travel and hotel bills.

Yusuf al-Qaradawi, banned since February, said: "I find BT a little bit pricey so I usually opt for the basic package from All Call which allows me to talk to six maniacs at once.

"The set-up is remarkably simple and you can always upgrade to the Advanced package which gives you a unique PIN number, but it's still only 5p per minute. It's so cheap – they must be mad!"

Al-Qaradawi added: "If for any reason a demented conference call is not convenient, then I simply make a crazy video and put it on the internet."