THE government is to repeal the law of gravity because quite a lot of people don't like it anymore.

Labour's deputy leader Harriet Harman said millions of ordinary people were furious that the universal force holding everything in place had been able to get away with it for so long.

She told the BBC's Andrew Marr Show: "Gravity might be enforceable in a court of law, or the universe, but it is not enforceable in the court of public opinion, and that is where the government steps in.

"People in this country want to know why heavy things don't just float about on the breeze like helium-filled balloons.

"Meanwhile ordinary families are dreading September and the prospect of millions of ripe, juicy apples bouncing off their hard-working skulls."

Ms Harman hinted that other universal constants may have to be reviewed, insisting the majority of taxpayers now think the speed of light is 'out of control'.

Clicking her fingers, she added: "It's that quick. In fact it might even be quicker than that. Do we really want light whizzing about the place in such a selfish and irresponsible manner?"

But British businesses have warned they may quit the country if heavy things are just going to float around in mid-air.

A spokesman for JCB, the JCB manufacturers, said: "A 20 tonne earth mover is of little use if it's suspended 40 feet above the earth it's supposed to be moving. You just can't get any purchase."

Bill McKay, professor of contractual physics at Reading University, said: "Let me try to explain this in layman's terms. Harriet Harman is an unbearably ghastly human being who will say and do anything to become leader of the Labour Party."

Ryanair Planes To Smell Strongly Of Urine And Faeces 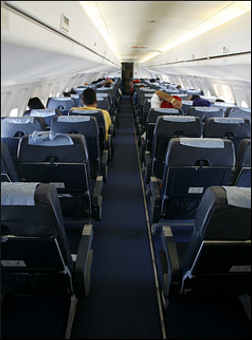 BUDGET airline Ryanair is to introduce the overwhelming stench of bodily waste to its 145 routes across Europe.

The company said that by removing the toilets, adding extra seats and transforming its planes into flying cesspits it was simply keeping pace with customer expectations.

Chief executive Michael O'Leary said: "Passengers should feel free to urinate on their seats or into a cup which they can then hand to the cabin crew who will be going up and down the aisle with a couple of buckets.

"Inevitably, given the nature of air travel, there will be some spillage, but the whole point of this policy is to make sure the aircraft is awash with as much human waste as possible.

"Anyone who has to expel solids can either turn round in their seat and try and squeeze it into the little magazine pocket, or they can take the magazine and squat in the aisle for a few minutes if that's more comfortable."

He added: "As always, Ryanair's first priority is the health and safety of our staff so we will be giving them climbing boots and crampons so they don't keep slipping in all that fresh dung."

Tom Logan, a frequent flyer from London, said: "I'm really looking forward to loading up on curry and Guinness and then going off like a muck spreader the next time I fly to Bratislava."

A spokesman for rivals easyJet said: "Letting people shit and piss all over the plane… no, I don't think we'll be doing that."