UP to a million homes will need special filters to drown out the bragging of 4G phone owners.

The next-generation mobile service will cause those living near media companies and student accommodation to experience interference to their evenings, as people with facial hair stand outside their window braying about how quickly they can download Bon Iver B-sides.

Mobile technologist Wayne Hayes said “The filtering system can cost up to £10,000 to install, which includes the cost of keeping a large, slobbering dog to chase away men in skinny jeans and a sign with a picture of an angry bird with a line through it.

“I’m advising people to keep an eye out for 4G transmitters going up in their area as it’s basically catnip for tosspots.

“Just one relay transmitter can service every man, woman and child that downloads Robin Ince podcasts within a 100 mile radius. It’s a horrifying image.”

Signal-hosting rights will be auctioned next year, with the winner being asked to meet the costs of building vintage clothing boutiques and quirky organic coffee shops in network areas.

East London resident Nikki Hollis said “This used to be a nice area – a bit run down but quite friendly – but ever since the notice went up at the end of my road that they’re putting up one of those masts I haven’t been able to watch telly at all for the sound of some nasal twentysomething shouting ‘amazeballs!’ at his mates all hours of the day and night.

“It seems that what Hitler couldn’t do with a V2 bomb, O2 are going to manage with an iPhone.”

Ghost Rider fans warned not to set their heads on fire 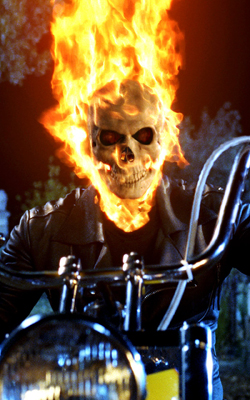 FANS of the character Ghost Rider have been warned to stop emulating their hero by setting their heads alight.

The comic book character is also the subject of poor quality films starring Nicholas Cage, the latest of which Ghost Rider: Spirit of Vengeance has just been released in the UK.

A & E doctor Emma Bradford said: “Since the Ghost Rider sequel came out we’ve seen a huge increase in people who’ve deliberately set their own heads on fire.

“They failed to understand that, as well as being a fictional character, Ghost Rider’s Johnny Blaze is supernatural in origin.

“My advice to anyone considering setting their own head on fire is to ask themselves, are you an undead former stunt biker escaped from Hell in a desperate bid to win your soul back, or are you the actor Nicholas Cage, playing that character?

“If the answer to both those questions is ‘no’, do not strike that match.”

Ghost Rider fan Tom Logan, whose head was on fire, said: “It hurts, it hurts so very much.”

Fellow fan Nikki Hollis said: “Of course I wouldn’t set my head on fire. I’m a woman, the character is male, therefore it wouldn’t be logical.”

It is not the first time Nicholas Cage films have triggered self-harming acts among viewers.

In 2006 audience members of The Wicker Man put cages containing angry bees on their heads in a gesture that mimicked the film’s final scenes as well as being an emotional response to the experience.