The experiment, in which neutrino particles were/will be/are discovered to have travelled/will travel/ are travelling faster than the speed of light, will take place/has already taken place/is taking place right now at the Large Hadron Collider.

The initial – or possibly final –  experiment produced, or has yet to produce, or is somehow still producing, results that scientists continue to find, are finding, or have yet to find shocking, even if they don’t know what the results are as the experiment may well not have taken place yet.

Discussing the findings, physicist Dr Carolyn Ryan said: “I thought I’d seen and was yet to see everything, but this quite literally blew, is blowing and will blow my mind.

“When the results first came in, two weeks from now, I was sceptical, but then I realised I’d seen them before, the previous week, and I’m also looking at them again now, for the first time, in utter astonishment”.

“There can be no doubt that this was a great moment for physics. But the moment immediately prior to it was probably even greater, and I look forward to both of them occurring sometime in the near future.”

When asked to explain the findings, Dr Ryan said: “It’s really quite simple.

“The initial experiment timed the arrival of neutrinos and found that they appeared at their destination a fraction of a second before they left their starting point, which means they were already part of the past of the event that was in their future and yet to take place, despite the result of the future event being something that had already occurred, and the past event proving that the future event was somehow already existent.

“Or to put it in layman’s terms, hasn’t Brian Cox got great teeth?” 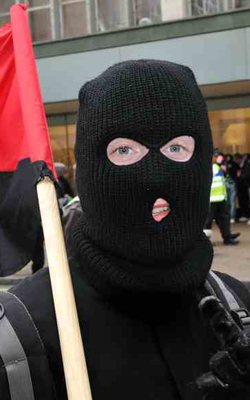 THE leaders of the G20 nations are undercover anarchists who have deliberately destroyed the West’s capitalist economy, it has emerged.

Further investigation has revealed that David Cameron’s real identity is that of ‘Beano’, a former fire-eater and ‘anarcho-clown’ from Dundee, whose fellow squatter ‘Wotsit’ is now better known as George Osborne.

Julian Cook, chief conspiracy analyst at Donnelly-McPartlin, said: “The people who are now running the G20 countries actually met at an illegal acid house party in 1991.

“Angela Merkel, Nicolas Sarkozy, David Cameron et al – as they’re now known – were a group of radical young idealists who all collided at a warehouse rave, ripped to the tits on powerful ‘California Sunrise’ ecstasy tablets.

“That night they all shared a joint on a fire escape as the sun came up, pledging that they would make it their life’s works to infiltrate and destroy ‘the system’, replacing it with something vague where everyone grows their own vegetables and has lots of sex.

“And thanks to exceptional determination, they may just have pulled it off.”

Meanwhile speculation has emerged that Occupy protesters who had allegedly defecated inside St Paul’s cathedral are members of an underground pro-wealth group calling itself Chablis Splendide whose agenda is to discredit the anti-capitalist movement.

Plumber and father-of-two Tom Logan said: “Whatever the hell is going on, I’ve stopped trying to understand it.

“I’ve just bought a powerful air gun and 4,000 cans of Big Soup and shall hide in my cellar until either the world ends or I really need the toilet.”