SCIENTISTS in the US last night claimed they had created a ‘supercarrot’ with a top speed of nearly 770 mph.

The genetically modified carrot tastes like a summer's day and provides the average person with the strength of ten men and almost a quarter of their daily requirements of riboflavin.

It is self-grating and dicing and can operate as an emergency doctor in earthquake zones or be used as a rapid offshore pursuit boat to rescue dogs swept out to sea by strong tides.

It also contains the destructive power of two atom bombs.

Dr Wayne Hayes, inventor of the new vegetable, said he had built it using old power station parts, a woman, three parsnips, the juice of a whole pig and a carrot.

He said: “It is voluptuous, caring, and sensual but knows its own mind and can produce the most wonderful ham.

“It can correct erectile dysfunction, intervene in the Middle East to promote a two-state solution to the Israeli-Palestinian conflict and deflect earth destroying meteorites from their course.

“Or you can just use it to poke Jamie Oliver very hard in the face.”

Bill Mckay, 86, said his life had been transformed after he was given one of the supercarrots as a home help for a month.

He said: “I had a tomato before but it was totally useless. This little beauty cooked all my meals, ran my bath and gave me a relaxing Swedish-style massage every night before bed. But there was no funny business. I’ve got parsnips for that.” 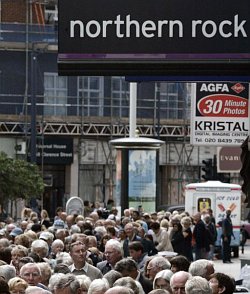 NORTHERN Rock has now been reduced to its two constituent words, its directors have told angry shareholders.

Chairman Bryan Sanderson said the word ‘Northern’ is valued at £80 while the much shorter ‘Rock’ is probably worth around £44.50, due to the ‘k’.

He said both words would be auctioned, and any money left after the bank had repaid the £50 billion it owed the taxpayer would be used to buy biscuits.

Mr Sanderson said: “I and my fellow directors and executives have received millions of pounds in wages and bonuses to keep this piece of shit going for a few months. Let me assure you it has been an incredibly sweet deal.

“We all have huge houses, big cars, expense accounts and are having affairs with dirty secretaries who can see which way the wind is blowing.

“We haven’t lost any of our savings and we have great pensions. Aha ha ha ha ha.”

Mr Sanderson said shareholders would soon be able to choose between a ‘big fat zero’ if the bank was nationalised or ‘absolutely fuck all’ if some greedy idiot could be duped into a take over.

“Whatever happens, I promise I’ll send you all a postcard from Sardinia.”