TALL researchers have concluded that short men are inferior in every possible way.

The report, titled Look At The Teeny Tiny Men, demonstrates that short men are less successful, have to sit on cushions to drive and are constantly simmering with resentment.

Project leader Dr Tom Booker, who is the ideal height of 6ft 3ins, said: “Remarkably, every one of our negative assumptions about short men turned out to be true.

“They are the Yorkshire Terriers of the human world: yappy, aggressive, annoying and easily shaken off a normal person’s leg.

We put a 5ft 5ins man in a room for 12 hours where food, water and entertainment were freely available, albeit on a shelf 7ft from the floor.

Within hours he was screaming, leaping, tearing the furniture apart, and throwing his own faeces like a red-faced miniature hairless ape.

In contrast, a normal man of 6ft locked in the same room for the same period happily got himself some crisps and a drink before settling down to watch Pointless.

The report recommends that short men be forced to wear muzzles in public, excluded from upscale venues by putting door handles higher up, and legally required to warn potential sexual partners of their substandard genetic material.

Booker warned: However, it isnt a case of the taller the better.

Every inch taller than 6ft 3ins a man is makes him 11% more freakish, and means he can only find employment in home removals, nightclub security or shelf-stacking. 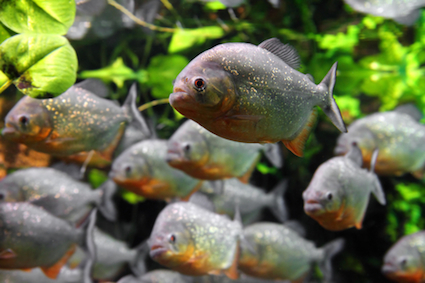 THE Environment Agency is to step up its attack on Somerset with more than two million carnivorous fish.

Piranhas will be released into the flooded Somerset Levels, turning thousands of acres of once productive farmland into an insatiable frenzy of blood.

A spokesman said: “Let this be a warning to all who would dare accuse the Environment Agency of incompetence.

The move is part of the environmental watchdog’s multi-million pound bid to overtake the Arts Council as Britain’s deadliest quango.

Next month all the hedgerows in Essex will be replaced by 20 foot-tall Venus fly traps and in April Shropshire will be forced to choose between anthrax and napalm.