Teleportation device not quite there yet, says disembodied head

STAR Trek-style teleportation is months away from becoming a scientific reality, the disembodied head of its inventor insisted last night.

Professor Michio Kaku’s head made the astonishing claim from the floor of a New York laboratory after a demonstration of his latest prototype.

It is claimed that Kaku’s device would be able to dissolve a human being into its constituent atoms, transport them through space and then reassemble them with an accuracy level of over 90%.

Dr Wayne Hayes, the professor’s lab assistant, said: “Oh my god. Oh my fucking god. What is that? It’s got an arm coming out of its stomach.

“And his bum’s inside out. That can’t be right. Pete, get a bucket. Be careful! I think you just stood on his eye.

“Holy Christ, his feet have run off. Don’t hit them. We want them alive. Right, just shove what we’ve got back in and I’ll stick it in reverse. Is that his knob?”

Professor Kaku said: “We’ll put it on sale as soon as we get to 95%. I’m sure people will gladly lose the tops of their fingers, or an ear, if it means they can cut 20 minutes off their commute.”

He added: “All models will be fitted with a set of handrails to prevent users from toppling over if their feet don’t arrive on time.” 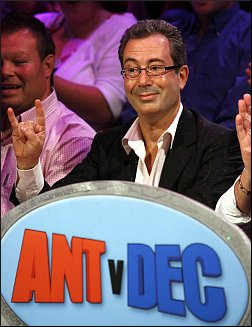 The creator of the Young Ones lashed out at today's performers, saying they had too much self-respect and were too worried about turning into ghastly, mediocre sell-outs who would do anything for money.

Elton said: "They're too scared to abandon any shred of credibility they may have had and churn out an absolute piece of shit with the man responsible for Aspects of Love.

"They're too scared to admit that Blackadder Goes Forth was just the same old jokes over and over again, and that the final scene was eye-gougingly awful and not in the least bit poignant.

"And they're too scared to write a pitiful sitcom about the police, which the BBC would have flushed down the fucking toilet if it didn't have my name on it and Rowan Atkinson didn't need a new Aston Martin.

"But most of all they're too scared to ponce about the place like some pseudo-intellectual cock saying 'profound' things about muslims."

He added: "Remember that thing I used to do about getting a double seat on the train?"