Worthless, Ill-Informed Opinions In Every Home By 2012

EVERY home in Britain will have access to an endless stream of worthless, ill-informed opinions by 2012, under new government proposals.

The Digital Britain strategy, unveiled yesterday, will mean no-one will be able to hide from the jibbering mess cascading from blogs, chat rooms and inexplicable newspaper comment threads.

The drive for universal broadband comes amid claims there are still too many homes across the UK where people are forced to read books and have actual, fully-formed thoughts.

But from 2012 every consumer will be able to use the internet to pick up a random falsehood and weave it quickly and efficiently into their own offensively bizarre world view.

Tom Logan, of the Institute for Studies, said: "The technology is rather complex but basically what we're talking about is a big pipe full of nutcases shoved through your front door.

"Not only will you be able to gape in horror at their unsettling combination of wide-eyed naivety and poisonous bigotry, but you'll also be able to spit your own half-chewed mince back at them."

He added: "You will experience the joy of watching a perfectly harmless chat forum about Subarus degrade into a series of furious, expletive-filled exchanges about why everything these day is run for, and by, Jewish homosexuals." 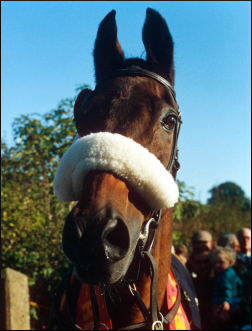 TONY Blair actor Michael Sheen is to extend his repertoire of real-life characters by playing Red Rum in a BBC mini-series.

Sheen will play the gangly brown foal, who gave up a promising medical career to pursue his dream of winning the Grand National twice in a row and then once more a couple of years later.

Horse Face will chart Red Rum's stormy relationship with trainer Ginger McCain including their explosive row on the eve of his third National victory in 1977, when Rummy stormed out of his stable threatening never to race again.

It will also explore the legendary steeplechaser's brief and ultimately doomed affair with Elizabeth Taylor.

The Welsh actor, who has played the former prime minister on TV, the big screen and at a school parents' evening, said: "Rummy was a hero, a joker and an artist, but above all he was a fairly large horse."

Sheen, whose other famous characters include Brian Clough, Brian Cant and Billie Holiday, added:  "I've asked John Hurt to help me prepare for the role and he has very kindly agreed to dress up as Bob Champion and ride me over a hedge."

The actor, famous for portraying both Kenneth Williams and Hattie Jacques, will also work closely with the now retired McCain who will feed him sugar cubes and smack him on his rump until he reaches top speed.

Sheen's next project will be a remake of the Charles Lindbergh bio-pic The Spirit of Saint Louis in which he plays the eponymous single-seat aircraft.