You’re not having any more phones, clumsy little bastards told

CHILDREN who keep losing their phones will have to make do with traditional communication methods such as letters, parents have decided.

Parents Richard and Emma Muir are taking the radical backward step after their children appeared to believe it was normal to lose or break a fucking expensive piece of cutting-edge technology.

Emma said: “Our 13-year-old Nathan lost his iPhone yet again, so we got him a calligraphy set complete with a quill. That’ll teach him to piss away our money every few months.

“He’s learning an interesting skill and it’s hilarious watching him try to fathom out how an envelope works.”

The ‘no phones’ idea is now becoming the latest parenting trend, with mum Sandra Hollis forcing her daughter Nikki to use a 25-year-old Dell PC with a dial-up internet connection.

Hollis said: “The first time she heard the dial-up screeching she ran away crying and saying it was ‘full of ghosts’. Now she keeps complaining the touch screen doesn’t work.”

Emma Muir concluded: “If Nathan manages to lose or break his writing set there’ll be bloody trouble. And by that I mean he’ll have to learn semaphore.” 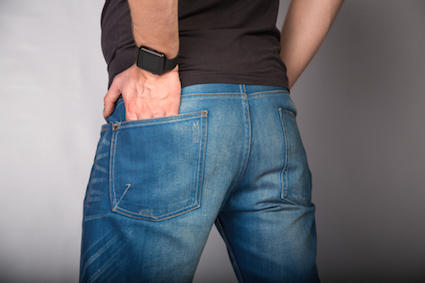 A 35-YEAR-OLD man feels that at this stage in his life he should probably own more than two pairs of trousers.

Tom Logan came to the conclusion after his usual pair of jeans got wet in the rain and his other pair of trousers – also jeans, but black – were still in the wash.

Coffee shop worker Logan said, “Both of my usual pairs of trousers were unavailable so I had to look at my limited options. They were not good.

“I’ve got some Bermuda shorts I wore to a fancy dress party years ago which I don’t even feel comfortable wearing alone in the house.

“There was an ancient pair of chinos, but I bought them a decade ago so there’s no chance of doing them up without internal organ damage.

“I thought I might be able to wear the jeans I had before my current two pairs, but the zip’s bust and there are two large holes in the crotch. If I go out wearing these I’m basically a flasher.

“My only option is to put on the Bermuda shorts and buy some new trousers. Hopefully people will think I’m an eccentric millionaire, not a middle-aged loser who should have his shit more together than this.