91 per cent of fringes regretted immediately

OVER 90 per cent of all fringes are instantly regretted, it has emerged.

Researchers at the Institute for Studies found that more than half of new fringe-havers burst into tears right outside the hairdresser’s, and almost all spent hours afterwards anxiously trying to restyle it into a different shape.

Accountant Nikki Hollis said: “I thought a fringe would be boho and cool, but I looked like a cross between a primary school pupil and a vengeful ghost in a Japanese horror film.

“I’ve been growing it out for 18 months now and it’s still nowhere near gone. It’s basically ruined my life.”

The most profound regret was among those who had opted to cut their own fringes or, worse, allowed a friend to give it a bash.

Frequently cited problems with the style included “mad sticky-up hair” which would not sit flat; turning the wearer’s forehead into a greasy playground for acne and feeling a bit like someone is tickling your face all the fucking time.

Experts found that the next most commonly lamented hair-related decisions were thinking you could pull off a pixie cut, and ever going anywhere near Sun-In. 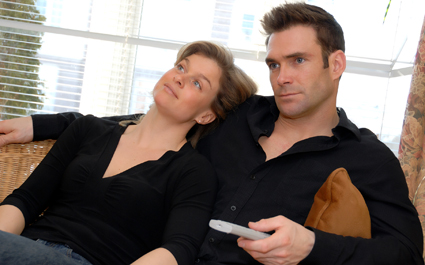 A COUPLE whose love life has waned dramatically have watched a televised sex scene in silence.

Nikki Hollis and Nathan Muir were watching what they thought was a straightforward ITV police drama when they were suddenly confronted with a passionate sex scene. Neither changed the channel in case the other thought they were making some sort of point.

Hollis said: “We have an unspoken agreement that when we watch TV together, we stick to sexless things. For example, Michaela Strachan isn’t suddenly going to start humping Chris Packham on Springwatch.

“I know TV shows chuck in sex scenes willy-nilly to keep viewers interested but have they no sympathy for people like me and Nathan who haven’t had sex for four months but can’t talk about it because if we did we’d end up unravelling the fabric of our entire relationship?

“I just stared blindly at the screen willing myself to have an out-of-body experience and Nathan pretended he’d lost the remote down the side of the sofa for the full four minutes that the scene lasted.

“Tomorrow night we’ll be sticking to Antiques Road Trip followed by a documentary about canals.”