Are you an annoying sod who was fanatical about Brexit but has lost interest now?

ARE you one of those irritating twats who was mad keen on Brexit but is now not really that arsed? Take our test and find out.

In the pub your friends start having a heated debate about Brexit. What do you do?

A. Join in, asking who on earth thought Brexit was a good idea.
B. Develop a sudden urge to play the trivia machine for three hours until closing time.

What is your greatest fear about Brexit?
A. A long recession or Britain becoming very insular.
B. Someone will find pictures of you waving a ‘Taking back control!’ placard on referendum night.

Brexit is turning out to be hideously complicated. What is your reaction?
A. You are worried our negotiators are way out of their depth.
B. You blithely say “It’ll all get sorted out!” as if scrapping international trading arrangements is a minor hassle like booking a B&B for four people in Cornwall.

Someone asks if you regret voting Leave. What do you say?
A. “Yes, it was really stupid. I feel terrible that people might lose their jobs.”
B. “Er… anyway did you see Holby City last night? God! Someone had an accident and had to go to hospital, it was amazing.”

Mostly As. You are either not a Brexiter or one who’s faced up to reality. It’s perhaps a shame you didn’t do that in, say, June 2016.

Mostly Bs. You are a former Brexit obsessive who now feels a bit sheepish, like when you were house-sitting for a mate and got a massive fag burn in their sofa. 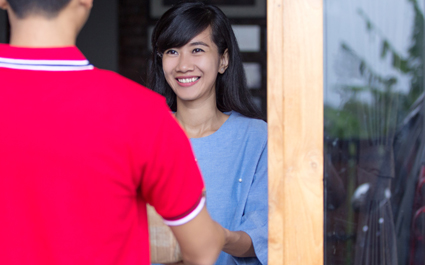 A POSTMAN in Gloucester strongly suspects he is delivering a sex toy.

Wayne Hayes, a postman who has had the same route for five years, says his first suspicion came from a glittering heart logo in the corner of the box.

He continued: “That suggests a romantic gift, but it’s not chocolates because chocolates don’t rattle. It sounds more like a torch rolling around in there.

“When I semi-accidentally dropped the box, the whole thing started shaking, as if the package contained an electric shaver.

“Or, more likely, a penis-shaped object with variable speed settings. Which is a bit embarrassing, isn’t it?”

Recipient Nikki Hollis said: “Thanks for this, I can’t wait to stick it in my vagina.”