Advent calendar just one more thing you’re behind on

THE daily pressure of opening a door on an advent calendar is already proving too much for overworked Britons.

Can guess how it ends

Just five days into December, more than three-quarters of advent calendar owners are reporting a backlog that they fear they will never get on top of.

Contractor Tom Logan said: Im absolutely flat out at the moment, so when my mum sent me an advent calendar my heart just sank.

Im exhausted just looking for the right door, and then youre got to open it without tearing the surrounding cardboard, prise the chocolate out, make a guess about what the hell its supposed to be and then eat it.

Somewhere in there Im meant to pause while my heart is gladdened by Yuletide cheer, but who has time?

Entrepreneur Julian Cook said: Im running a business with a turnover of millions, so I think Ive earned the right not to do my own advent calendar.

My PA keeps on top of them for me, opening the doors and sending me daily emails about which symbol of seasonal joy has been revealed.

I dont read the emails.

Women told to give birth in safari parks 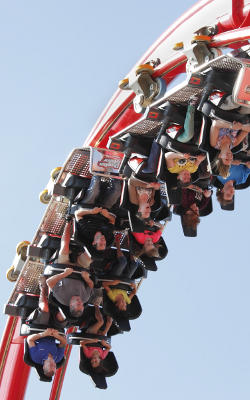 PREGNANT women have been advised to forget boring hospitals and to go into labour in nightclubs, on trains and in safari parks instead.

New NHS guidance urges expectant mothers to forego a nice, clean bed in a building full of medical professionals in favour of an exciting location that will make a great story to tell the baby when it grows up.

Dr Roy Hobbs said: In the old days, before paid maternity leave, women were always giving birth in shoe shops or at the hairdresser or on the assembly line at British Leyland.

Wed all read the story in the newspapers, chuckle at details like a comb being used to saw through the umbilical cord, and our days would be brightened.

But sadly todays lazy females dont want to give birth to their first child while watching Led Zeppelin at Knebworth, their contractions timed to John Bonhams drumming in Moby Dick, because of silly worries about complications and blood loss.

We need to bring that tradition back, if only because then children would be called things like Uber or Nando instead of them all being called Oliver or Olivia.

Mother of four Joanna Kramer said: I gave birth to my first while white water rafting, my second on a horse and the twins while doing a bungee jump  one on the way down, the other on the way back up.

Of course theyve all been taken into care because Im an unfit mother, but adventurous or what?