THE picturesque parts of Britain are now full of utter dickbags, it has emerged.

As figures confirm an exodus of affluent Londoners, experts confirmed that intolerable twats could no longer be avoided in even the most remote places.

Professor Henry Brubaker of the Institute for Studies said: “Thanks to broadband internet and paranoia, anywhere with grass and birds within a 400-mile radius of the metropolis is almost entirely populated by dreadful people with MacBooks who work in ‘branding’.

“The UK has reached a kind of ‘bullshit tipping point’ where if you want to avoid the kind of people you get in London, you have to move to London.”

38-year-old reality television producer Emma Bradford said: “Thanks to broadband internet I can now do my evil work from a lovely country cottage, while also writing Sunday supplement pieces about making jam.”

Digital media executive Stephen Malley recently moved to the Cotswolds: “I am a massive tool and was worried the move from London might cut me off from similarly loathsome people.

“Turns out this village is an absolute arsehole jamboree. Virtually everyone in it is stinking rich and self-absorbed, it’s basically Queen’s Park with breathable air.

“On Sundays we get in the pub with our little arsehole children and spread our possessions over all available seating.”

“But when people come in here asking for Monocle magazine, I set the dog on them.” 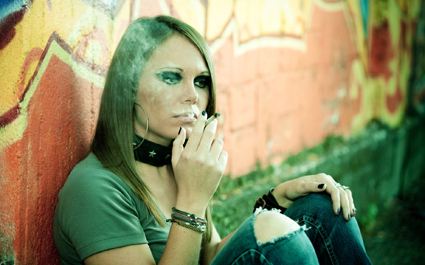 BRITAIN’S cannabis smokers ‘dorked out’ responding to a survey on drugs legalisation.

After a study found that only one person in seven wants drugs decriminalised, potheads said they had meant to participate but somehow never got around to it.

Stoner Tom Logan said: “Yeah, I think they sent me a form about that. I really wanted to fill that in but somehow just didn’t get it together.

“I’m pretty annoyed with myself for missing the deadline but never mind, shit happens. I’ll definitely do it next time.”