GOVERNMENT plans to scrap speed cameras were last night welcomed by middle-aged men who believe themselves to be excellent drivers.

Council cuts could see thousands of cameras scrapped and melted down, though pro-death campaigners have called for them to be recast as statues of Jeremy Clarkson doing 60 past a school while eating a scotch egg and listening to some pile of shit from the 1970s.

The move has also been hailed as a rare victory for common sense, in a country where anti-establishment voices like Clarkson’s are often restricted to prime-time television, national newspaper columns and six-figure book deals.

Tom Logan, a 52-year-old managing director of a hosepipe factory, said: “When I’m behind the wheel it’s a perfect synergy of man and machine. Especially after a long boozy business lunch, with the top down on the Saab as I root around the glove box for that Fleetwood Mac CD with the grand prix theme on it.

“As I’ve said before to everyone I’ve ever met, speed cameras exist purely to steal money from law-abiding people like myself and use it to subsidise experimental theatre.”

He added: “Fat lesbians. A disabled black man. A cock-eyed gypsy with a lisp.”

Professor Henry Brubaker, of the Institute for Studies, said: “Young drivers are often very resentful towards speed cameras, but as you grow up you realise that a car is actually a very large bit of metal. Or you become one of those arseholes that you hear so much about.”

But Roy Hobbs, a 48-year-old who has his own pint glass behind some bar, insisted: “Fundamentally, I believe I should be able to go as fast as I want, wherever and whenever I want. Because that’s what I want. Is that too much to ask?

“It’s actually a French-black-homo-perpetuated myth that pedestrians die when they get run over. Most of the ones I’ve hit have immediately apologised for denting my bonnet before agreeing with me that it’s actually the fault of some health and safety officer from Queeristan.”

Wayne Hayes, the real name of a person who drives a bright orange Ford Focus, added: “If they do get rid of speed cameras I’ll have nothing to believe in. But it’s okay, because Jeremy will tell me what to believe in. 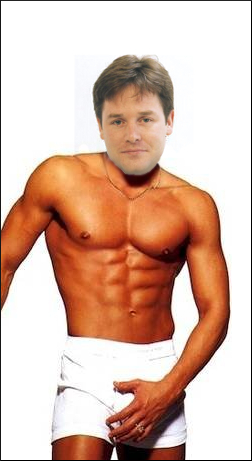 FORMER Tory leadership contender David Davis has a photo of Nick Clegg’s head on Peter Andre’s body, which he keeps stuffed down the front of his underpants, it emerged last night.

Mr Davis, who resigned from the shadow cabinet a couple of years ago over something or other, was heard last week describing prime minister David Cameron and his Lib Dem coalition partner as a ‘pair of cowboy poofters bumming each other in a tent’.

But friends of the MP said the remarks were just the latest sign of Mr Davis ‘acting out’ his jealousy and frustration at not being able to be near Mr Clegg and kiss him on the mouth.

A source said: “Just so’s we’re all clear, this isn’t a political analogy in any way. David Davis desires Nick Clegg and wants to have sexual intercourse with him.

“A lot of people assumed there was something going on between David and Shami Chakrabati from Liberty. But he really just needed someone to talk to about Clegg and Shami’s a great listener.

“She actually advised him to resign in the hope that Clegg would be so filled with admiration for his liberal principles that the two of them would end up going out for dinner and that would be the start of it. Again, not an analogy, he really wants to fuck him.”

The source added: “David is quite turned on by the idea of them doing it in a tent up a hill, but ideally he’d prefer the sex to happen in a nice big bed at the Dorchester.”

“Apparently he’s watched it so much he’s had to order a new copy.

“But the strange thing was, when I walked in, he didn’t stop. He just raised his left hand as if to say ‘give me a minute’ before bringing himself to a shuddering climax while shouting ‘I agree with Nick! I agree with Nick!’.

“He then pulled up his trousers and asked me how I was.”