One Woman's Week: Save Us From Ugly French Women

I CAN almost see where the French are coming from: being forced to dress a certain way is wrong. But I fear perhaps they’re unable to see the wood for the trees on this issue. Shouldn’t the question be: do we really need to see their faces?

Lots of people make the mistake of going all Arabian Nights over full face veils. But let’s get real here: you’re not going to find any Konnie Huqs under those bad boys. Those veils are there for a reason: namely, French women are constantly burly and furious and it’s a real downer for tourism. And – dare I say it – there may even be some evidence to suggest the veil should be enforced in some cases. Just spend a couple of weeks in France and you’ll soon get a feel for the continentals. Let me tell you, urging them to go out without their veils will just mean they have to shave more often. Not only will this take valuable time away from the significant contribution veiled women make to the French economy via online poker, but will also interfere with prayer mat routines and cooking along with Nigella.

I see enough miserable losers on my holidays to Marseilles without this added inconvenience. Muslims are renowned for their appalling sense of humour – just look at Omid Jalili. Accordingly, I have come up with a marvellous solution which will make everyone happy. I was inspired upon watching the London marathon when five runners had made masks using cardboard cut-outs of Take That’s faces with holes for the eyes. This hilarious idea just about made me wet myself with laughter and helped me to realise that marathon runners are actually very intelligent. French women could really learn something from them. Of course, I’m not saying it would need to be Take That all the time – maybe just once or twice a month. The rest of the time theyâ€™d be free to have any celeb they chose – even Bin Laden or Omid Jalili. This would serve the dual purpose of brightening everyoneâ€™s day and allowing them to continue oppressing themselves in their most favourite of ways.

The aftermath left by the whole Raoul Moat saga is indeed worrisome. But I think everyoneâ€™s missing the most disturbing point of all: A woman apparently being of sound enough mind to get herself pregnant to the same man twice in a row named her children ‘Raoul’ and ‘Angus’. Broken Britain indeed.

Poor Cheryl Cole has proved herself yet again by going all native. But her carelessness seems to have bitten her on the bum this time. I know itâ€™s been tough since Ashley, but any responsible person who thinks they might be taking a holiday where sharing needles and lots of anonymous partners are on the cards should always get the jab before they set off. 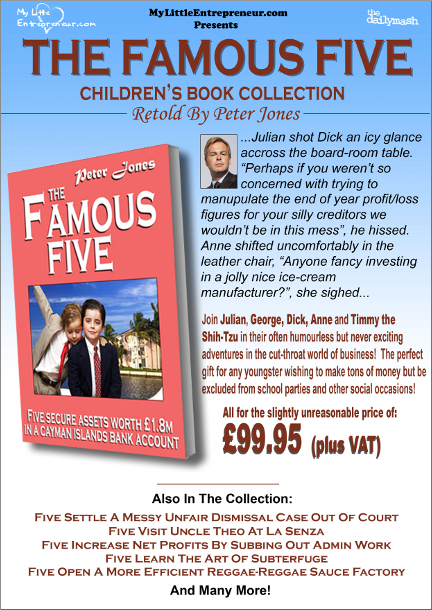