MALE pattern baldness sufferers have discovered news of a possible cure tucked away on page 16 of their newspapers. The men, who range from 25 to 55, reacted to the buried news with a sharp intake of breath, rereading the article line-by-line looking for a web address where they could buy the cure, and finally set the newspaper down and stared longingly into the middle distance.

Studies of bald men and laboratory mice in the US have discovered a protein that triggers hair loss and could be blocked by drugs. The studies have taken longer than expected because the bald subjects were so jealous of the mice’s fur they kept crushing them.

The story also appeared briefly as a final item on television news, causing bulb-headed chemistry teachers, bouncers and computer programmers to wonder why everyone was fussing about the budget.

Prematurely receding Stephen Malley said: “I wanted to get on the roof and shout for joy, but I couldn’t find a hat.

“I’m amazed this isn’t a bigger media event but also glad because when the time comes I can pretend it grew back naturally.”

Even though the cure may be years from release, slapheads around the world are cashing in shares and taking demeaning second jobs to stockpile cash in readiness.

“If I had hair I could be an airline pilot, or Action Man.

“Even if the cure makes you grow massive breasts I would take it, on balance I would still be more confident.” 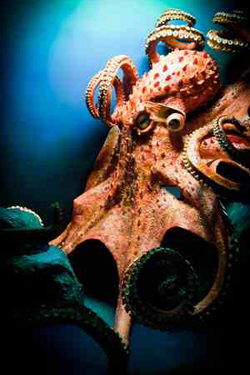 THE 75th anniversary of the death of horror writer H.P. Lovecraft has been commemorated with an indefinable sense of terror. Fans of the influential writer – whose works depict mankind as the hapless puppets of the ancient, evil creatures lurking on the fringes of our reality – paid their respects by sitting bolt upright in a intense state of paranoia-bordering-on-insanity.

Horror fan Roy Hobbs said: “I’ve got Lovecraft to thank for opening my eyes to the utter meaninglessness of human existence in a vast, cold universe full of dread. So naturally I wanted to pay my respects by driving myself temporarily mad with fear.

He added: “It was mid-morning at the time, and a strange shadow fell across my desk.

“I looked up and saw… a thing beyond description, a thing of such pronounced hideousness as to mock almighty God by its very being, a being that no human tongue could name nor mortal syllable describe”

“Rubbing my eyes, I realised it was actually my line manager, Richard, telling me to stop staring like a mentalist and do some work.”

Thousands worldwide remembered the groundbreaking writer’s passing by experiencing an eerie feeling that they were being watched, possibly by beings not of this realm, and glimpsing slimy things from the corners of their eyes.

25-year-old Lovecraft devotee Emma Bradford: “Late yesterday afternoon at about 5.30pm,  I felt overwhelmed with dread and disgust at the unnameable, tentacled, sub-human horrors lurking all around me.”

“However, that is actually quite normal, as I work at Spearmint Rhino.”