BRITAIN finally hurtled beyond the point of no return last night as the political opinions of Simon Cowell were regarded as important.

Around the world dozens of nations have expelled British diplomats, closed embassies and commandeered British businesses after the voting intention of the inventor of Shit Factor and Britain Must be Stopped was the lead story in the country’s biggest newspaper the day before a general election.

The prominence given to Cowell’s thoughts has left the pound teetering on the brink of total and irreversible collapse as the White House made an urgent call for Britain to be suspended from Nato and the country’s permanent seat on the UN Security Council handed to Robert Mugabe.

In Columbia, the leaders of the world’s biggest drug cartels said British people were no longer good enough to buy their cocaine, while Osama Bin Laden insisted that he would not waste perfectly decent bombers on the British but stressed that if we continue to attach importance to any of Mr Cowell’s opinions we will all be dead by the end of May anyway.

Ali-Al Mukhtar, the Pirate King of Somalia, added: “Like everyone else we have a franchised version of Shit Factor, but that doesn’t mean I want his opinion about who should be prime minister. Jesus Christ.”

Professor Henry Brubaker of the Institute for Studies said: “Britain is basically finished as a nation. As far as the rest of the world is concerned we are nothing more than a stinking pile of human refuse.

“We are a puke-filled gutter, we are a bucket of piss, we are a used condom in a sandwich made of mouldy bread and rotting chicken gizzards – we are less worthy of respect than our own steaming faeces.”

He added: “Only the Australians seemed to be impressed, so obviously I’ll be killing myself with this crossbow.” 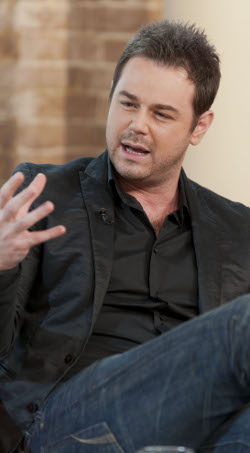 SO there I was, walkin’ the mean streets of West Hampstead with only a six-man camera crew and seven security advisors for company.  By the looks I was gettin’ from some of the naughty local faces â€“ Lucy, the Channel 4 documentary maker, Victor, the Classics teacher and Cameron, the web designer – I was beginnin’ to feel like Nick Love at the Cannes Film Festival.

As I strolled down the street, hands in the pockets of me Crombie, I was walking the walk of a geezer what knows that around the corner there may well be some fuckin’ lunatic waitin’ to open me up like a tin of beans and make a name for himself, but on this occasion I was in luck – it wasn’t no fuckin’ lunatic, but Rory my producer who’d just been in to CafÃ© Nero to get me a skinny latte and a blueberry muffin, the fuckin’ mug.

I’ve known some tasty geezers in my life, but in my next series Danny Dyerâ€™s Hardest Cocks it’s finally time for me to scour the nation in search of the gangster with the firmest shaft. I can tell you, it isn’t no fuckin’ picnic neither. For instance, there was Mad Jim McNulty of Aberdeen, who could hang a Black & Decker workmate from his bell-end – it was a bit  like Buckaroo, only it weren’t no plastic horse in the middle of the room, it was a right, proper naughty face with a sackload of odds and sods dangling precariously from his three card trick. No place for faint hearts or nonced-up ponces, I can tell ya.

It’s been a big year for yours truly – I thought the birth of my boy, Cosh, was fuckin’ blindin’ – but even that was put in perspective when the script for my next film landed on me doormat. If The Football Factory was naughty and The Business was proper double naughty, then you ain’t seen fuck-all yet. My long-time collaborator and visionary genius, Nick Love, is only remakin’ fuckin’ Summer Holiday. I’m playin’ Cliff Richard, but this time I won’t be mincin’ about in a bus and breakin’ into song at the drop of a fuckin’ hat, I’ll be the top boy in a proper naughty firm of nutters who drive around Europe in a Range Rover Sport, knockin’ the shit out of anyone who looks at us the wrong way. Come on you England!

Nick and myself have come under fire for the films we’ve made together. One reviewer reckoned the latest box set was ‘mindless tripe for tedious morons’, but others have slagged it off somethin’ rotten. I’m thinkin’ particularly of our It Ain’t Alf Hot Mum remake about some naughty bank-robbing Gurkha casuals scrappin’ it large with a Japanese firm of proper geezers. All I can say is – take a butcher’s at what’s been toppin’ the Poundland DVD charts for the last three days and have that, you fuckin’ muppets.