YOUR brother-in-law has previewed his feeble excuses for driving drunk over the festive season.

“I am still a better driver than any woman”

The arrogant shitbag said: Im from a different era, before political correctness came along and changed everything so you had to be sober to drive a motor vehicle past a playground.

In my defence, Im never so drunk that I cant see the road. I’ve got brilliant reflexes anyway, always have had.

Widely disliked family member Booker, who is also a racist, continued: Also I keep some dry roasted peanuts in the car which science says sober you up instantly because of all the nut oils.

Sensing the room turn against him, Booker mumbled something about his fathers generation and how we used to have more freedom.

Adopting a sanctimonious tone, he added: I would never do it with kiddies in the back.

A lot of people do though.

Relatives confirmed that if Booker gets caught he will blame the pressures of his divorce, which is obviously bollocks because that was eight years ago and it was him who had the affair.

Britons long to be servants 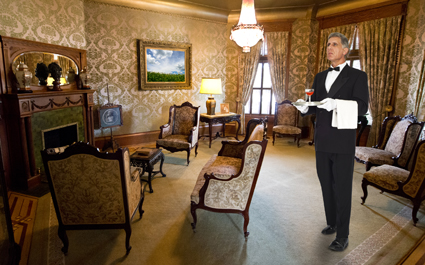 THE UK’s pathetic obsession with posh people is caused by a desire to perform menial tasks for the upper classes, it has emerged.

Researchers at the Institute for Studies found that 83 per cent of Britons just wanted to be put back in their place, even if that meant warming slippers for contemptuous big house-dwellers.

Professor Henry Brubaker said: “The reason why every other telly programme is some utter cack about ‘poshness’ is that ordinary Britons cannot handle freedom or any sort of self-determination.

“Like faithful spaniels we recognise our masters on the television, and long to be back in their massive cold houses, living in a cupboard under the stairs and getting mercilessly beaten with a wicker chair for overdoing Lord Plankton-Bowers’s boiled egg.”

Marketing consultant Stephen Malley said: “I’ve earned a bit of money but to be honest I’ve still got horrible taste. Clearly I am a born pleb and have applied for bedpan-supervisor roles in various big houses.

“Hopefully I can progress up the ranks to the top servant position of ‘ruddy-faced below-stairs bully’.”