Councillor Suspended For Branding Earth 'Round'

A CARDIFF councillor has been suspended after claiming the Earth is round and orbits the sun.

More than 200 Flat Earthologists complained after Cllr John Dixon posted a Twitter message referring to the Earth as a ‘globe’.

A council spokesman said: “Staff have a responsibility to respect the beliefs of others, no matter how scrotum-tighteningly idiotic they may appear to anyone with the cognitive ability to actually get to the end of this sentence. Well done.”

He added: “We have a very clear policy on tolerance and inclusivity, which we’ve had translated into dozens of languages as well as having it carved into enormous stone monoliths for the local druids. That cost an absolute fortune, by the way.”

Employee numbers have dwindled at the authority since January, when it agreed to allow registered Vikings to kidnap female employees out of respect for Norse mythology.

Meanwhile followers of the Persian deity Mithras have won a tribunal giving them the right to slaughter a bull in the canteen every Monday lunchtime.

Wayne Hayes, a Level 19 Flat Earthologist from East Grinstead, said: “Dixon’s remarks are just typical of the prejudice we face on a daily basis just because we refuse to bow down to the dogma of scientific proof.

“He should be fed to the Great Salamander of Xenu or at the very least taken to the edge of the world and pushed off.

You Really Don't Want Us To Show The Actual Burger, Says Burger King 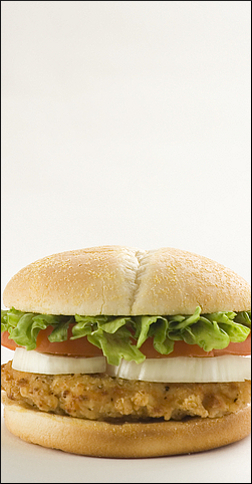 BURGER King last night stressed there is a very good reason why its advertising campaigns do not show the actual burgers.

As the Advertising Standards Authority banned a BK ad for depicting edible food, the company said Britain absolutely does not want to see lingering close-ups of the thing they actually sell.

A company spokesman said: “Of course we show it to be large and fresh and succulent. Quite often people will be trying to eat during a Burger King commercial and the last thing they need to see is our version of food.

“We could do an uncompromisingly realistic advert if that’s what you really want, but there would have to be a large arrow pointing at the meat with the message ‘do not adjust your set, it’s supposed to be that colour’.

“Then we would pan back to see the bloated, pasty, halfwit scum who’s about to stuff this mess into his wonderfully indiscriminating face.

“And perhaps we could even wait for him to flatulate in appreciation as he collapses backwards onto his ghastly sofa and thrusts a fat, greasy hand down the front of his leisure pants.

“Or we could all just carry on with this harmless pretence.”

Professor Henry Brubaker, of the Institute for Studies, said: “Once again the ASA tries to fix something that isn’t broken.

“Of course we all know what it actually looks like, otherwise the countryside would be overrun with unemployed cows and you’d be sharing your downstairs bathroom with a chicken.”

He added: “The fast food business model is based on a fundamental and perennial truth. Whether for reasons of time, convenience or a simple, bastard hangover, we will all, at some point, find ourselves outside a Burger King, a McDonalds or a KFC thinking ‘oh fuck, I’m actually going to have to eat this shit’.