A COUPLE whose love life has waned dramatically have watched a televised sex scene in silence.

Nikki Hollis and Nathan Muir were watching what they thought was a straightforward ITV police drama when they were suddenly confronted with a passionate sex scene. Neither changed the channel in case the other thought they were making some sort of point.

Hollis said: “We have an unspoken agreement that when we watch TV together, we stick to sexless things. For example, Michaela Strachan isn’t suddenly going to start humping Chris Packham on Springwatch.

“I know TV shows chuck in sex scenes willy-nilly to keep viewers interested but have they no sympathy for people like me and Nathan who haven’t had sex for four months but can’t talk about it because if we did we’d end up unravelling the fabric of our entire relationship?

“I just stared blindly at the screen willing myself to have an out-of-body experience and Nathan pretended he’d lost the remote down the side of the sofa for the full four minutes that the scene lasted.

“Tomorrow night we’ll be sticking to Antiques Road Trip followed by a documentary about canals.”

Are you an annoying sod who was fanatical about Brexit but has lost interest now? 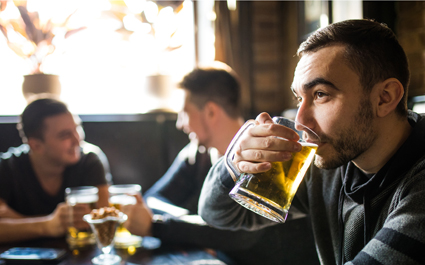 ARE you one of those irritating twats who was mad keen on Brexit but is now not really that arsed? Take our test and find out.

In the pub your friends start having a heated debate about Brexit. What do you do?

A. Join in, asking who on earth thought Brexit was a good idea.
B. Develop a sudden urge to play the trivia machine for three hours until closing time.

What is your greatest fear about Brexit?
A. A long recession or Britain becoming very insular.
B. Someone will find pictures of you waving a ‘Taking back control!’ placard on referendum night.

Brexit is turning out to be hideously complicated. What is your reaction?
A. You are worried our negotiators are way out of their depth.
B. You blithely say “It’ll all get sorted out!” as if scrapping international trading arrangements is a minor hassle like booking a B&B for four people in Cornwall.

Someone asks if you regret voting Leave. What do you say?
A. “Yes, it was really stupid. I feel terrible that people might lose their jobs.”
B. “Er… anyway did you see Holby City last night? God! Someone had an accident and had to go to hospital, it was amazing.”

Mostly As. You are either not a Brexiter or one who’s faced up to reality. It’s perhaps a shame you didn’t do that in, say, June 2016.

Mostly Bs. You are a former Brexit obsessive who now feels a bit sheepish, like when you were house-sitting for a mate and got a massive fag burn in their sofa.