Do you need to drive up a residential street at 53mph or are you a massive wanker?

ARE you speeding to rescue a child from a burning building or does going really fast for 40 metres make you feel like Vin Diesel, knobhead? Find out:

What sort of car do you have?

Where are you going?

A) To an ongoing hostage situation, to a man suffering a cardiac infarction, or to a time-bomb the red numbers of which are already on 0:58
B) To the local corner shop to buy a can of Monster

Who are your passengers?

A) My partner in the police force who was one day from retirement, took a bullet to the lung and is bleeding out
B) My mates Kev and Dave who don’t have licences anymore because they’ve been banned for reenacting Baby Driver on the A46 through Nailsworth

What music is playing in your vehicle?

A) No music, just a shortwave radio keeping me abreast of life-or-death situations to respond to
B) F**k Tha Police by NWA with as much bass as possible. Although when I got pulled over by the actual police I struggled not to soil myself

What do you hope pedestrians are thinking about you?

A) I hope they’re keeping out of my damn way, because I only have two minutes to save the city, the Lord Mayor and my pregnant wife!
B) ‘Wow, that guy must be super cool and have a massive penis,’ though oddly their facial expressions seem to say ‘What an annoying dickhead’ 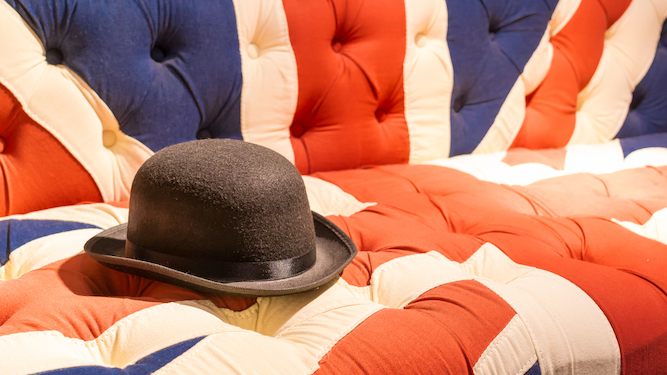 AS CONSERVATIVE member for Eddisbury, the room Julian Cook Zooms in is full of perfectly ordinary Union Jacks and busts of Churchill. Stuff like this:

Every ordinary, average, patriotic Briton’s home has at least one freestanding flagpole to bear the Union Jack whose fabric they finger while remembering the sacrifices made by previous generations. It’s as normal as a sofa or television. I have one in every room, including the downstairs toilet where I think of Dunkirk, and five in the bedroom.

Portrait of the Queen

I love the Queen, and not just because she appears on money. I love her regal grandeur, her country estates, her vast private income and her resolute refusal to ever express any political view. More women should follow that example. There are so many portraits of her it’s Bolshevik obstinacy not to display at least five.

None of your fiction. That’s for frivolous liberals who believe we should support ‘the arts’. Instead, like the average Stoke-on-Trent Brexit-backing Conservative voter, I keep biographies of Nixon, Thatcher, and General Pinochet on the shelves behind me. Political figures who unite.

There is nothing in the least odd about keeping a red telephone box containing a Spitfire nosecone, an oil pressure gauge from a Lancaster bomber and the Luger my great-uncle took off a dead Jerry at Montecassino in my home. It would be strange and communist if I didn’t.

Lego is a hobby many Britons enjoy, and I personally chose to build Big Ben because I love my country, unlike ‘Sir’ Keir Starmer. As you can see I have used Lego men to recreate the famous sequence where James Bond hangs from the clock’s minute hand. I play with them sometimes and do the voices.

I don’t have this, and when it swung open behind me and my nine-year-old swaggered out wearing a vintage Hitlerjugend uniform, that was just a malfunctioning Zoom background. I was hacked.