TEENAGERS in the grip of the 'emo' suicide cult have been urged to spend more time in the garden playing swingball.

Child behaviour experts stressed that summer is the perfect time to shrug off nihilistic angst with a makeshift badminton court or an impromptu water fight.

Dr Roy Hobbs said: "Get yourself a Fairy Liquid bottle and give it a good rinse. Add some balloons and a hose and hey presto! You're all set for a summer of fun!"

"Collecting frog spawn from the village pond is great fun and the children soon realise there's more to life than songs about eating your own vomit while pumped-up on skunk," he said.

"Fresh air is the key. There's nothing more satisfying than when a child puts down his iPod – filled with its hellish death racket – and picks up a fishing rod."

He added: "Rather than listing the different ways they'd like to kill themselves, I encourage them to write a poem or a short story about their favourite railway journey, or the day they won the 'Big Swingball Championship'.

"And if none of that works, I just tell the little shits to cheer the fuck up."

Talk Of Camper Vans At Highest Since 1991 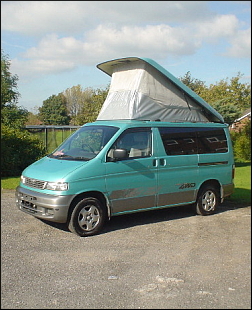 TALK of buying camper vans rose sharply last month and is now at its highest since 1991, the Nationwide building society said last night.

Nearly 24 million people told a work colleague that next week they would march in there, tell them to stuff it, buy a second-hand Volkswagen and head off to Spain for a year and just hang out, they really would.

But five million said they would wait for redundancy so they could spend their lump sum on a Mazda Bongo and drive it overland to Goa, where they would smoke as many drugs as they could and never come back.

Nikki Hollis, an unemployed estate agent from Richmond said: "I want one of the cute ones with the lovely faces. I’ll give it a name, put up gingham curtains and make a matching bandana for my dog.

"We’ll visit all the little villages the tourists never see, the lovely peasants will all come out to greet us with their donkeys, I’ll tell them we’re from where the Queen lives, and that it’s a type of car you can sleep in."

Julian Cook, an insecure accountant from Clapham, said: "I'm going to paint mine psychedelic, fill it with joss sticks and beautiful Indian ladies skilled in the arts of tantric humping.

"They can do the most amazing things with their ying-yangs you know. And cook curries."

"But while the VW is cute, and would be a magnet for the honeys, you still have to ask yourself if it has the staying power of the Mazda, or the same availability of spares."