Everyone worried winter hats make them look like dicks

MILLIONS of Britons are feeling unconfident in their warm winter headgear.

As temperatures drop, streets are full of people checking themselves out in reflective surfaces while nervously fiddling with headwear that they do not feel quite right about.

Beret-wearer Nikki Hollis said: “I thought it was sophisticated, but I’ve just seen myself in the window of the bookies and I look like an A-level philosophy student or minor Mad Men character.”

Tom Booker, the owner of a new beanie, said: “I started with a bobble hat, but my girlfriend said I looked ‘adorable’ and pinched my cheek.

“I bought this one last week, but now I’m thinking it’s too big. Do I look like Brian Harvey from East 17?

The Institute for Studies confirmed that everyone would be too busy worrying about their own hat to judge others, although anything with animal ears would be rightly shunned. 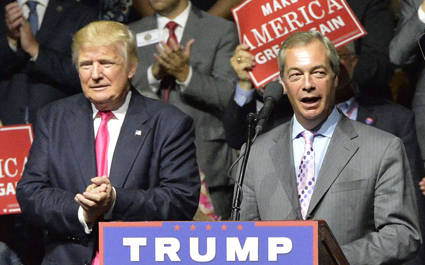 NIGEL Farage has admitted that he may accidentally have told Donald Trump he is Britain’s prime minister.

The former UKIP leader confessed that he failed to correct an early misunderstanding which has now snowballed into a new transatlantic alliance.

He said: “I went over, and Mr Trump congratulated me on running the UK after Brexit, and we were about to go on stage so I joked ‘Certainly a big responsibility, ha ha!’

“After a few fizzy Yank beers I found myself claiming that UKIP had been made the ruling party following an intervention by my friend, the Queen, and also that my wife was a former Miss Germany and Playboy model.

“You’ve not met him, it’s like he makes you say these things.

“Anyway he really seems to like me and it’s probably just easier for everyone if I just take over.”

Farage added: “The ironic thing is, neither of us actually ever intended to lead a country because it’s a massive pain in the arse.”