Girls whispering about you

THESE girls are whispering about you, it has been claimed.

The girls, who are talking in hushed tones punctuated with the odd malicious-sounding laugh, have probably noticed something about your appearance.

“One of them whispers something and then the other one laughs. It might be about your face.”

Professor Henry Brubaker of the Institute for Studies said: “We may never know conclusively whether these girls are whispering about you, or if you are just being paranoid.

“I’m not going to ask them. They’re terrifying.” 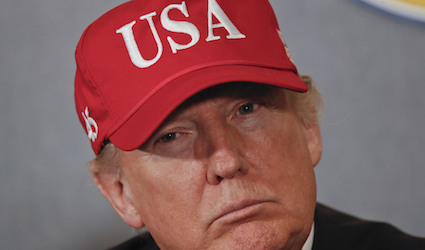 A NEW science fiction series is set in an alternate reality where Donald Trump is a wise and kind leader of humanity.

Forthcoming Netflix series Donald is set in a parallel universe where the president of America is not an absolute sack of cocks.

Writer Wayne Hayes said: “Imagine a world where Trump didn’t feel conflicted about racists, where instead of constantly lying and talking shit he governed with a true sense of moral authority.

“We’re going to show ‘alternate reality Trump’ making good decisions, displaying empathy and surrounding himself with sane people who don’t look like they eat toads out of jars.

American Joanna Kramer said: “I am quite prepared to accept zombies or that other nonsense about the town that’s under some sort of magic dome, but when these series become too unrealistic I lose interest.”