Government still thinks you drink like a bastard because it's cheap

A NEW crackdown on alcohol pricing suggests ministers still think you get shitfaced because of money.

The coalition has drawn up detailed plans to introduce a minimum price for alcohol after not bothering to find out what people are actually like.

The new laws are a first step in the government’s bid to tackle Britain’s fondness for the sweet, sweet booze that makes you feel warm and fuzzy as the stress of your bullshit job just melts away into a river of fermented yumminess.

A spokesman for the department of health said: “We made a graph that shows how the price is inversely proportional to the fuzzy yumminess.”

But Professor Henry Brubaker of the Institute for Studies explained: “The centre of London is full of young people who have decided not to have expensive, complicated children so that they can continue to afford Stella Artois at Â£3.70 a pint.

“The piss you invariably find yourself ankle deep in on a Friday night in Soho is already outrageously expensive.

“Meanwhile the middle class couples in Twickenham and Barnes who have put their children to bed and are now draining bottle after bottle of nicely chilled white are not just necking any old shit like it’s going out of fashion, thank you very much.

“Wouldn’t it be interesting if the government asked why you yearn for the gentle bosom of inebriation instead of trying  to build a dam with some Angel Delight?”

“So if, at this point, you still can’t work out what’s actually going on here then it really doesn’t matter if you’re constantly hammered.” 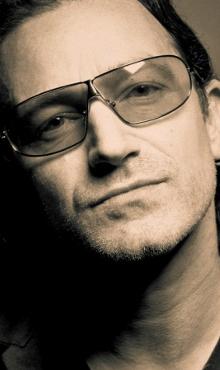 There are music journalists who say that U2 are the greatest band of all time.

This can prove embarrassing, especially when you have to pick up a gong at one of those glitzy music industry ceremonies and one of your peers says, ‘hey, Bono, I read that article about you being the greatest band of all time, and you know what? I have to agree with them’. Unfortunately that tends to happen a lot, but I manage to shrug it off as something I have to live with.

It seems our ambitious project to bring the story of Spiderman to Broadway is going tits-up. So we packed our bags and flew off to New York to see if we could rectify the problem. Because that’s what I do, I solve problems – be it making sure we’ve got the top three floors of the Four Seasons Hotel or ending the war in Darfur with the power of my eyes.

The musical looks like it’s going to need the odd tweak here and there. The Edge thinks it might be a good idea if we sort of lose the score we’ve written and instead replace it with the theme to the 1970s cartoon and play it on a loop. The other two people in the band seems to think it’s a good idea too. As you know U2 is a collective and all decisions are made democratically. But on this occasion I had to put my foot down for several reasons: number one – my idea is better, and number two – I don’t need another reason because the fact that my idea is better should be enough.

As someone who’s managed to reach the very peak of my craft, I feel it’s my duty to use my fame to try and influence those people in power. Just the other day, I called the British Prime Minister to have a chat with him and generally light a fire under his ass.

The conversation went something like this: “Hello is that David Cameron? David – it’s me, Bone, the rock star and social entrepreneur. As the Prime Minister could you take it upon yourself to ease the pain and suffering of the poor and the hungry by persuading the bankers, the industrialists and the billionaire landowners to donate some of their money? Yes, I do havea few quid in the bank myself, but it’s my job, Prime Minister, my job to tell the public that some people are really, really poor, and some people are really, really rich. Without my constant campaigning, Prime Minister, no-one would know this.” One ass fire well and truly ablaze. Thank you very much.

But I like Cameron. Not as good as Brown, but better than Blair. Blair thought he was Jesus. I hate people who think they’re Jesus.

People often say to me: “Bono, why don’t you just put your hand in your pocket and donate more money yourself – you can afford it?” This is, of course, an extremely naive assumption. My role is as a visionary, a social engineer, I raise awareness.

Plus it would totally fuck up my accountant’s tax strategy,