Half A Million Benefit Cheats Throw Themselves Down The Stairs

A CONSERVATIVE plan to cut the number of people on incapacity benefit was in tatters today as 500,000 people threw themselves down a staircase.

Across Britain council houses and tower blocks echoed to the tell-tale thump of work-shy layabouts hurling themselves towards a guaranteed £25 a week.

Under the Tory plan all those who are deemed fit for work will have their benefits cut and be forced to look for jobs that currently exist only in the mind of Norman Tebbit.

Tom Logan, of the London School of Economics said: "By 2014 we should be in a situation where half the country will be assessing the employment capabilities of the other half until they get bored and throw themselves down some stairs.

"They will then join the queue for assessment and will eventually be employed assessing people who have recently thrown themselves down some stairs. And so on."

Tory leader David Cameron denied the move was a return to the harsh Thatcherite policies of the 1980s, adding: "I will personally ram a knitting needle into the thighs of all those who claim they are unfit for honest labour.

"Any scoundrel that lets out a shriek will have the gin bottle snatched from his grasp before being manhandled into the back of a cart and dumped outside the gates of his local cotton mill, bobbin factory or call centre.

"The wretch will then be forced into an upright position where he will learn the virtues of toil and the base immorality of screen breaks.

"If they apply themselves and refrain from griping, then perhaps they will rise to the rank of tradesman and one day may even be in a position to ask me how much money I have."

Should Britain's Ethnic Minorities Have Their Own TV Dance Contests? 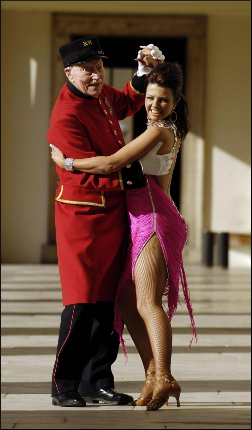 THERE were renewed calls last night for Britain's ethnic minorities to have their own celebrity dancing competitions.

As Strictly Come Dancing became immersed in its latest ethnic conflict, fans of the show said it was yet more evidence that the races will never successfully integrate, either in ballroom or Latin.

Margaret Gerving, a Strictly viewer from Guildford, said: "There were never any rows in the original series of Come Dancing.

"I'm not saying it was perfect but everyone got along, there was less crime and you did not see long queues of indigenous British dancers at the employment exchange."

She added: "I've got nothing against the coloured people but they do not dance the same way as us. They dance in a messy, smelly way and their food tastes awful.

"Let them have their own dancing competitions. In their own countries."

Mohammed Iqbal, chairman of the British Association of Muslim Ballroom Dancers, called for segregated state schools so that young Asians could learn the foxtrot in accordance with the Koran, while understanding the moral degeneracy of Western dance steps.

He added: "Young muslim men need to retain their distinctive ballroom identity, while young muslim women should learn how to dance while wearing a floor length hessian sack and doing the dishes."

Meanwhile commentator Peter Hitchens, writing in the Mail on Sunday said: "Once again we are confronted with the catastrophic failure of the soft-headed multi-culturalism that began in the 1960s, that era of trendy, irresponsible dance-based policy making.

"But will the BBC finally have the guts to tell immigrant dancers to change their name and paint themselves beige? Don't count on it."