How to feel betrayed by everything

WHY stop at politicians and Brexit? Betrayal is everywhere, everyone is a backstabber, and your only hope is to be hysterical about it. Here’s how to be double-crossed by everything:

Inanimate objects are traitors too

The toaster didn’t burn your crumpet on purpose, because such ideas are not real. However, work up a head of steam for the day by calling it a ‘spineless breakfast Quisling’ and chucking it into the back garden.

Accuse your family of treason

Did your kids say they’d put their school shoes on five minutes ago but are still slumped in front of the telly watching Paw Patrol? Tell them they’re fifth columnists undermining the system from the inside.

Get apoplectic over lunch

Is the tomato missing from your lunchtime BLT sandwich? Furiously accuse it of breaking its promises and tell it that prison is too good for it in front of the whole canteen.

The old lady in the corner shop probably didn’t mean to short-change you, but rather than giving her the benefit of the doubt accuse her of being a perfidious and corrupt member of the capitalist elite. Add in ‘saboteur’ for good measure, even though it doesn’t make any sense.

Give the cat absolute hell

You want to go to bed, but the cat can’t decide if it wants to be inside or outside. While this is annoying, calling it a ‘treacherous Judas who deserves to be hanged’ will send you to bed good and furious. And tomorrow’s another big day. 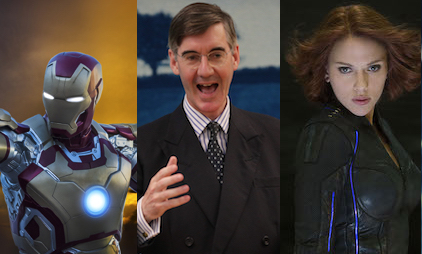 THE superhero event movie of the decade is here, but who the fuck are all these people and what the fuck are they doing?’

IRON MAN (Robert Downey Jr): Remember 100 years ago when these movies started? When they were fun, and you didn’t have to go through a checklist of all the other movies before you could see this one? This guy’s from back then. Probably dies soon.

STAR-LORD (Chris Pratt): Literally just a dude, which was fine when he was co-starring with aliens in his own movie but makes him entirely redundant here. Watch as he repeatedly excuses himself from battles to mess around on his phone.

BLACK PANTHER (Chadwick Boseman): One of only three black characters, Black Panther is the one who isn’t a sidekick.

BLACK WIDOW (Scarlett Johansson): Major movie star and sex symbol Scarlett Johansson has a recurring minor role just so these films don’t seem completely like teenage boys’ homoerotic fantasies. Which they are, and she knows it, and so do you.

THANOS (Josh Brolin): The bad guy of these films will be unfamiliar to anyone who skips the post-credits scenes of Marvel movies. If you know him, congratulations for finally reaping the reward of watching text you’re not interested in. For an hour.

BATMAN (Ben Affleck): Batman is from a different universe and should not be in this movie, but he turned up on set in like the full outfit and it was totes awkward and nobody could quite tell him and so he just ended up in it. Embarrassing.

THOR (Chris Hemsworth): All the other gods totally look down on Thor for being in these films. It’s like reality TV to them. Hercules does this hilarious impression of him.