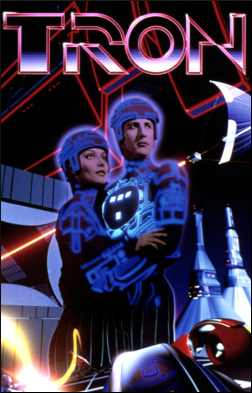 Logan, 33, has purchased two tickets for the film on its release date, paying an Â£8 supplement for luxury seats with padded neck rests.

He said: “The original Tron is one of the best films I’ve ever seen. There’s no way this isn’t going to be amazing, what with the cutting-edge 3D and the soundtrack by Daft Punk. And the bikes. The very big bikes.

“People keep saying, ‘Maybe a film about a guy getting sucked into a computer game won’t be as entertaining now you’re not a child’ and ‘it’ll just be another empty-hearted rehash using technological smoke and mirrors to disguise an absence of story and creativity, like always’.

“What utter bollocks. It’s going to be AMAZING!”

“I have been trying to manage his expectations without upsetting him. Tom always gets really excited whenever Hollywood revives some tired old franchise, and then he struggles terribly with the disappointment.

“After seeing Attack of the Clones he walked straight up to the thing in the lobby that warms the hot dog sausages and put his hand on the hot bit until you could smell burning bone. They nearly had to amputate.

“And after Terminator: Rise of the Machines, he went mental at some kids, brandishing an upside-down Callippo like it was a knife.

“So I keep dropping hints about how Jeff Bridges probably won’t be in it that much, stuff like that.

“But who knows, maybe it’ll be really good.

“Except that it definitely won’t.”