Joe Rogan, and other bullshit sources 'free thinkers' get their information from

PEOPLE who like calling others ‘sheeple’ don’t get their information from the mainstream media. They use these highly reliable sources instead:

Newsrooms across the world are in thrall to liberal governments and can’t be trusted to be objective. But do you know who can? Your weird uncle Terry who blames every major geopolitical and economic problem in the world on the fact that there are now more Muslims in Woking than when he was growing up.

Instead of getting your information from peer-reviewed, accredited sources, why not get it from a former MMA fighter who looks like he’s cosplaying as one of the Mitchell brothers? Always keen to provide ‘alternative’ points of view, it won’t be long before Rogan is asking: ‘Does fire actually hurt if you put your hand in it, or is that a lie spread by the MSM?’

Do you know what has the required resources, contacts and journalistic prowess to rival the world’s major news outlets? A random website you saw a link to on Twitter that looks like it was made by a 12-year-old with a penchant for clip art. Never mind that the article about vaccines making your testicles explode was littered with grammatical errors, the science is definitely correct.

Ever wondered what would happen if you took the worst aspects of Twitter and Wikipedia and put them in a blender? Then pay a visit to Reddit, where you’ll find a bunch of anonymous idiots pretending to be experts without having to provide any proof. If you’re looking for conspiracies that make David Icke seem as good at reporting facts as Jon Snow, you’ll find them here.

Readers like the Daily Mail as they think it’s the only paper in the UK unafraid to report things as they really are. If you look past its vested Conservative political interests, virulently right-wing columnists and Paul Dacre, then yes, it will objectively provide you with the important news: creepy long-lens photographs of teenage celebrities sunbathing. 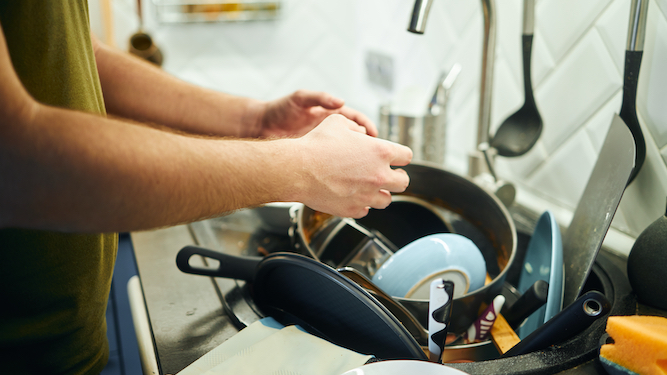 THE so-called ‘day of rest’ is actually the day of tedious chores, including these five tasks that make you yearn for the punishment of the daily grind:

Hoovering wouldn’t be so bad if you were cleaning up after a party but you’re just sucking up dust that’s sloughed off your horrible, flaking body during the week. Plus Henry’s smug, smiling face makes you feel like he’s following you around taking the piss. Roll on Monday morning when you’ll be free to get bollocked in a 1-2-1 meeting about your poor performance.

You could get your food shopping delivered, but then you’d have to wait for it at home, spend a certain amount, and they’ll f**k up half the items anyway. That’s why you’re spending your precious weekend trying to herd a shopping cart round Morrisons and filling it up with ready meals. Daydream about spreadsheets until you’re finally finished.

First you have to separate the colours and check the pockets. Then you need to fill up the detergent drawer and push some buttons. And that’s before you even factor in hanging up your laundry and ironing it. Make life easier by buying new clothes when your old ones start to smell of BO. Or even better, become a naturist.

If you did this during the week it would only take a couple of minutes. But you’ve let seven days’ worth of dirty plates pile up and now all the food stains have become hard as diamonds and impossible to scrub off. You don’t get this sort of shit in the office, mainly because the cleaner you politely ignore washes everything for you.

The final boss of Sunday chores. There’s tile grouting to scrub, a toilet to bleach, and an untidy cabinet full of verruca gel and cotton buds to put off sorting for another week. Just try to power through as quickly as possible, not everything can be as fun as compiling the Q1 sales report you’re now fantasising about.