THE Wiltshire village of Knotting Hill's annual fete has gone off without violent death for the 114th year in a row.

Organisers say the success of this year's event was due to a 100% increase in police numbers after local constable Tom Logan agreed to work Monday afternoon as long as he could have next Friday off to do a bit of shopping in Bristol.

Local vicar Rev John Lewsey said: "Last year we made the mistake of running the fete on the same day that Pc Logan was doing cycling proficiency tests for the Beavers.

"This year he was able to give us his undivided attention and thus no Wham bars went missing from the Lyon's Club tuck stand."

Last year Pc Logan's absence led to a 13-year-old entering the 'Garden on a Plate' competition in the 8-12 age group, while local hooligans rearranged the prize marrows and melons in the competition marquee to resemble some genitals.

This year's event enjoyed record attendance figures of about 50 or 60 with some fete-goers travelling from as far away as Chipping Norton.

Attractions included cakes, a bearded loner with an owl, and a lucky dip in which players could pay 50p to win mystery sweets worth 14p.

This year's celebrity was Liz 'Sonia from Shoestring' Crowther, who opened the event with a fascinating anecdote about the time she nearly killed Trevor Eve's cockatoo by accidentally giving it pasta.

Pc Logan said: "There was a minor altercation when a seven year-old won a bottle of sherry in the tombola. Sandra, who is Pete Hugginson the plumber's wife and makes wicker mice, said he shouldn't be allowed to keep it, but she quickly changed her mind in the face of overwhelming force."

He added: "By and large it was a textbook crowd control operation and I won a goldfish off a gypsy." 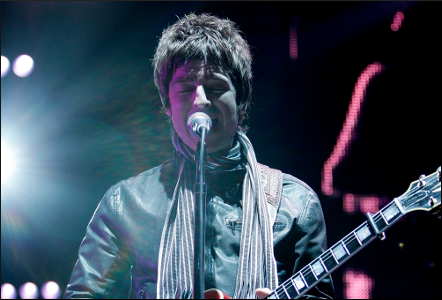 POP group Oasis will stage a comeback later this year under the new name of Noelgallagher, it emerged last night.

Sources close to the Manchester band said the music will sound the same in every conceivable way, but with a slightly deeper and less annoying voice.

Music critic Tom Logan said: “The great thing about them, as a band, is the way Noel writes every note and every word and then tells some people who are basically glorified session musicians exactly what to do.

“Let’s hope that changing their name to Noelgallagher won’t affect that.”

Logan added: “It will be interesting to hear how they sound without that voice that’s fine for about 10 to 15 minutes before you feel the surging desire to find out where he lives and pour a jug of quick-drying plaster down his throat.”

Wayne Hayes, an Oasis fan since 1994, said: “I’ll miss the fact that Noel Gallagher and his employees are not called Oasis anymore.

Emma Bradford, from Peterborough said: “It won’t be the same without the randomly selected bass player, the other guitarist, the session drummer and the singer who you always secretly hoped wouldn’t turn up so that Noel could sing instead.”

And almost-Oasis fan Roy Hobbs added: “My favourite song is the one about Sally being kept waiting, because when you listen to it you can imagine, just for a few minutes, that Liam Gallagher doesn’t exist.

“And that makes me happy.”