London house prices falling because it is horrible

HOUSE prices in London have slumped because the city is an awful consumerist nightmare, it has been claimed.

After it emerged that London property prices were falling at an unprecedented rate, experts said this could be because it is a ghastly, depressing place full of adverts and bastards.

Professor Henry Brubaker of the Institute for Studies said: “Besides the obviously economic challenges faced by London residents – that’s an academic way of saying it’s a fucking rip-off – everyone there seems very angry and you cannot open your eyes without seeing the Trivago woman’s chilling, flawless face.

“I suppose it’s good if you like massive trainer shops with a weirdly fascist vibe, huge characterless swathes of fancy flats and queueing for 45 minutes to go and eat a £20 burger.”

Londoner Emma Bradford said: “Like most people in London, I moved here to prove some sort of weird point to the people in my home town.

“Now I have a job in marketing and pay a cleaner who comes to do nothing in my tiny flat, just because it’s ‘what you do’. Keep away from this city. Save yourself.” 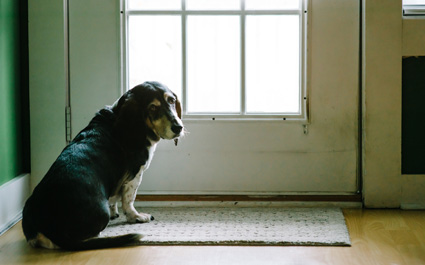 A DOG has confirmed the cancellation of a trip to the garden because of poor weather conditions.

Dog Wayne Hayes said: “I can confirm that this morning’s garden visit, during which I planned to do a shit and sniff around for evidence of squirrels, will no longer be taking place.

“There are a number of safety concerns arising from the rain, chiefly getting a wet coat but also the possibility of skidding due to lack of paw traction.

“The garden trip will now take place this afternoon or when the rain stops, whichever is sooner, because obviously I will need a shit before too long.

“I apologise to household members who responded to my initial scratching at the back door. I merely wanted the door opened so that I could further monitor the weather situation, after which I decided not to embark.

“Einstein said ‘the measure of intelligence is the ability to change’, which clearly means you should stay indoors if you don’t want to get your ears all wet.”