AN ASPIRING musician has discovered that his fall-back career option of setting up a world-renowned record label is only marginally less impossible.

Stephen Malley was shocked when he found out that achieving success as a music label mogul is almost as difficult as becoming an international pop star at the age of 38.

Malley, who works from the home studio he has made in his parents’ garage, said: “I’ve always known it’s good to have something to fall back on, that’s why I had the whole millionaire record label boss thing.

“Of course I’d like to win a Grammy, but I’m realistic about my prospects and have always said I’d be chuffed just for one of the artists on the label I set up to win a Grammy.

“But apparently the music industry is really competitive, even if you’re running a label which I’d have thought not many people would be into because it’s less glamorous.”

Malley is now considering selling out by winning a television talent show: “I don’t imagine I’ll enjoy being rich yet creatively unfulfilled, however it might inspire a great album about how ‘the industry’ is a massive machine like a McDonald’s burger factory.

“I love saying ‘the industry’.”

Friends make sure to get group photo of awful night out 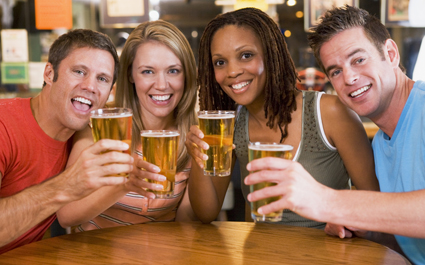 AN AWFUL, depressing evening out has been immortalised in a cheerful group photo.

Dental nurse Donna Sheridan demanded that her friends “all get in close together and smile” although they were having a miserable time and looking forward to going home at the earliest possible opportunity.

Sheridan’s best friend Nikki Hollis said: “Emma lost her phone, Nikki was arguing with her boyfriend via text all night and Julian spilled a drink down the front of his trousers which he kept saying was typical of his overall bad luck in life.

“I accidentally tipped the barman a fiver because of some confusion over change, then we went to a club for a bit and felt very isolated from the other punters and from each other.

“But we made sure to get a photo of us all smiling to put on Facebook to show everyone how great our nights out are, even the ones where we all get kicked out of the club because it looks like Julian has pissed himself.

“Afterwards it took two hours to get a taxi because there was a massive fight at the rank and people kept pushing in. Still, in life you’ve got to focus on the fake good bits.”