Inflation To Continue Doing A Variety Of Things, Says Bank Of England 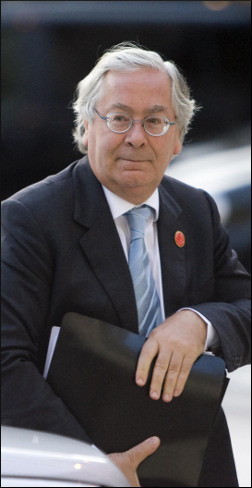 BRITAIN faces several more months of inflation doing things before eventually deciding to do some other, equally interesting things, the Bank of England warned today.

Issuing his latest inflation report, Bank governor Mervyn King said: “VAT – that’s one of the things – then of course there’s all the oil and gas, the cars, the food – let’s not forget the food. So basically, yes, all those sorts of things… obviously.

“Erm… what else? It says here that clothes are cheaper – though I suspect that’s because it’s summer and so the clothes are generally a bit smaller and don’t use up as much fabric.”

Holding up a graph he had drawn on some paper, he added: “Quite possibly up for a while then along in a straight line for a bit before heading down, then up again, then down again.

“Or it could be more of a zig-zaggy kind of thing, depending on a wide variety of factors which you simply would not understand and so there is no point in me wasting my breath with a lot of technical what-nots and doo-das.

“Suffice to say, we have established beyond doubt that inflation exists and almost certainly has something to do with money.”

Meanwhile chancellor George Osborne told city analysts that he had a funny feeling that everything was going to be just fine.

He said: “I’ve been looking at all these charts and they just look really nice. All we need now is for the Under-flationary McPherson Exchange to keep pace with the, er, Johanssen Index of Surplus… Trade… De-Balancing?

“And also people should buy loads of shit and stuff.”

The City welcomed the chancellor’s comments. Julian Cook, chief economist at Donnelly-McPartlin, said: “This graph looks a bit like a mountain. What’s the one in Switzerland? Not the Eiger, the other one. I wonder why it decided to look like that? Fascinating.”

Mr King added: “Sweet Jesus, I’ve just noticed the price of eggs. How the fuck did that happen?