Middleton leased to Berlusconi in bid to slash deficit

Financial gurus believe Britain’s record deficit could be slashed by nationalising Kate Middleton and hiring her out to distinguished, wealthy men of taste.

Julian Cook, chief economist at Donnelly-McPartlin, said “Some of these so-called ‘high class’ companions get £2,000 an hour for their friendship skills yet from their website pictures it seems most of them look like Zelda from Terrahawks.

“Kate’s very pretty and although she may be a little old, I’m sure a wealthy well-connected gentleman – step forward Mr Berlusconi – would pay something to the tune of £3,500 or even £3,750 for an evening of her personal attentions.

“The taxpayer would simply need to stump-up for a soulless flat in a quiet cul-de-sac near an airport and perhaps a few towels, as I believe is the custom with such things. But I do think both sides are getting a deal.”

He added: “Whatever takes place would be strictly between them. Kate could just bathe him or something.

“Silvio strikes me as the sort of man who likes to be cuddled while he cries. In this scenario Kate would not be acting as an ‘escort’ in the pejorative sense.

“Rather she would just be prostituting herself emotionally, whoring out her soul if you will, but without any actual intercourse.

“It’s just a very real, very practical way in which the monarchy can serve the nation in its time of strife.

“However we do need to seize this window of opportunity before she starts pumping out heirs.

“The prime minister of Italy likes it nice and tight.”

Cameron to tackle BNP by doing exactly what they want 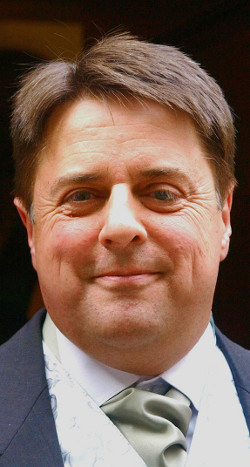 DAVID Cameron is to halt the rise of the BNP by ensuring they have nothing to complain about.

In a keynote speech the prime minister will say the fascists’ recent success is because of Labour’s ‘open door’ immigration policy and to counter the BNP that policy must be reversed in accordance with page five of the BNP manifesto.

He will tell an audience in Hampshiristan: “Support for the BNP is directly proportional to immigration. So the fewer immigrants we have the weaker the BNP becomes, until eventually there are no immigrants and no racists.

“And isn’t that what we all want?”

Mr Cameron is also expected to deploy his latest integration bullshit and stress that if immigrants are subject to racism it is probably because they are foreign.

He will add: “Britain is defined by its overwhelming sense of community. We know the names of all of our neighbours and are in and out of each other’s houses all the time.

“We say a cheerful ‘hello’ to everyone we pass on the way to the bus stop and every weekend we all get together in the church hall for a nice pot of tea and some sticky buns that have not been ritually slaughtered.

“So when someone comes here with their halal bagels and doesn’t say ‘good morning’ in a loud, clear voice it is perfectly natural to hate them and the colour of their skin is completely irrelevant.”

Mr Cameron will insist that where traditional community values have been eroded it is because of multiculturalism and has nothing to do with increased television viewing, work place stress, the absurd price of a pint or the Mail and the News of the World scaring everyone shitless about paedophiles.

The prime minister will also insist that immigrants learn English to a sufficient standard so they are able to send semi-literate text messages or post grammatically bizarre and emotionally troubled ramblings on newspaper websites.

But Tom Logan, professor of thinly-disguised racism at Reading University, said: “You may say they are coming here and helping themselves to ‘our’ jobs and services, but if they then say that we helped ourselves to their countries for 200 years then that’s what grown-ups call a ‘valid argument’.

“And if you’re the sort of ‘person’ who is worried about Sharia law taking over Britain, then what you need to do is shut your stupid fucking hole because it’s a demented, racist lie.

“Meanwhile, if you point that out to someone and they roll their eyes or call you ‘naive’ then for Christ’s sake back away because they are about to start defending ‘that poor bloke from Midsomer Murders’ and then you’ll want to ritually slaughter yourself.”