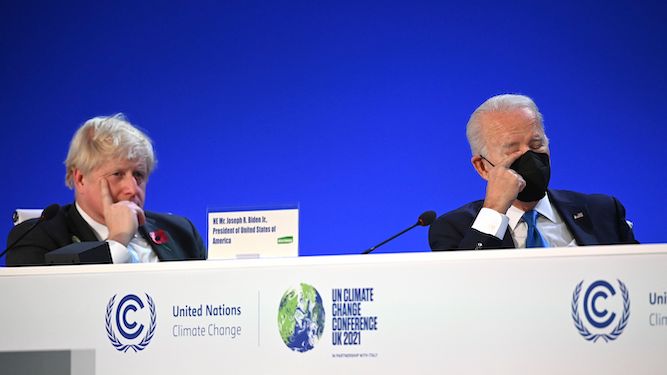 THIS week has been busy at both Buckle Up! Insurance in Reading and the COP26 conference in Glasgow. But which had the more concrete achievements?

More than 100 leaders signed up but Brazil’s Bolsonaro wasn’t there and anyway this pledge was already made in 2014 with no discernable effect.

Suspended for the pandemic, the office has returned to its old opening hours which means 12pm-8pm shifts every six weeks on a rota. Widespread whinging but it’s already started.

COP26: US and EU announce partnership to slash methane

By 30 per cent by 2030 apparently. But most methane comes from cow farts and there’s no practical solution for those yet. Nobody wants their picture next to the cow-fart headline.

Buckle Up!: Told Gary that he’s not homeworking now

It was a difficult conversation, but Gary needed to know that his distinctive unwashed scent is polluting the open-plan office. He came in the next day fresh and chastened.

South Africa is getting £6.2bn to end its reliance on coal for electricity, which it definitely will use for just that purpose and not just pocket while carrying on using the coal it’s got loads of.

An unpaid expenses claim which has been hanging over the business since July, when Sue had a too-fancy lunch, has finally been settled. A fog of distrust has lifted.

The Oscar-winning actor visited the conference and posed for some photos. That’s it.

Lucy, the younger sister of the managing director’s wife, made a rare visit to the office and Kyle actually got up the courage to ask her out. They’re meeting at Cerise Bar this Saturday.

The US president told Russia and China they were making a ‘big mistake’ for not attending. The countries in question shrugged.

Buckle Up!: Lauren gets fired

After strutting in late again, and then admitting she’d broken Sue’s favourite mug, and a customer complaint about her attitude, Lauren got called in and fired. Actually fired. No verbal warning, no written warning, out on her arse. It’s the most exciting thing that’s happened in years.