As the government pressed ahead with welfare reform despite some bishops rejecting a £26,000 benefit cap, the nation’s job centres braced themselves for an influx of millions, ready to embark on a fantastic career.

Experts predicted it will be the first time Britain has experienced full employment since 526, when Olaf the Prudent opened the Dark Ages’ largest pig showroom, in Colchester.

Julian Cook, chief economist at Donnelly-McPartlin, said: “Welfare reform is always complex and controversial but I think we can safely say that this time it is going to be perfect.”

Long-term claimant Nikki Hollis said: “Don’t get me wrong, while raising two kids in a bedsit on eighty quid a week has been a hoot, I finally have to accept that play time is over.

“I just can’t decide whether to work for a major clearing bank or a traditional, high street retailer. Talk about your dizzying rainbow of life-changing opportunities.”

The entire benefits system is expected to be defunct by early March, making thousands of people unemployed who were formerly employed in preventing bedsit-based malnutrition. However, most of them are expected to quickly find work as racing drivers or astronauts.

Meanwhile left-wing atheists have insisted that any reform of the House of Lords must now exempt unelected Jesus-freaks with pointy hats.

Tom Logan, from Finsbury Park, said: “I don’t believe that Jesus was God but I do believe he knew that £26,000 pounds is not a lot of money these days.”

Roy Hobbs, from Doncaster, added: “My take home pay is £25,000 a year and I have to raise three kids. If they promised not to molest it, I’d happily give one of them to the Church.”

RBS chief to get bonus or legal fees and bonus 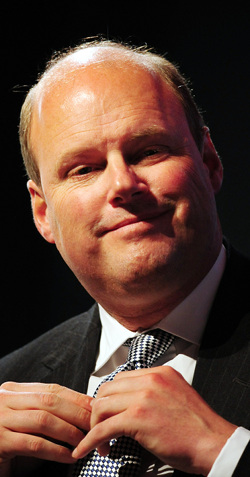 THE taxpayer will have to pay for Stephen Hester’s bonus or pay for his bonus and his lawyers, it has been confirmed.

Amid increased pressure to deprive the Royal Bank of Scotland chief executive of his full pay package, Hester looked up the word ‘contract’ on his iPhone and then called the senior partner at a law firm that describes people like you as ‘lunch’.

“Now, imagine how you would feel if the boss of the ghastly open plan office you share with dozens of other people suddenly said to you, ‘I’m sorry, but the Guardian say I can’t pay you this month because it thinks you’re a dick’.

“I imagine you would be straight on the phone to your trade union or some bog-standard local solicitor.

“Now the thing is, maybe you are a dick. Take a look around and you may notice that Britain is choc-a-bloc with people who are just dicks.

“But the great thing about you and me is that we both have contracts which stipulate the exact circumstances under which we do or do not get our lovely money.”

Experts said that in circumstances where idiot newspapers are not involved people tended to behave rationally and focus on whichever set of utter cretins drew up the contract in the first place.

Professor Henry Brubaker, of the Institute for Studies, said: “Stephen Hester’s contract was drawn up by the party that is now claiming his contract is a disgrace.

“Ed Miliband is a fucking child.”