Our jobs are not even slightly dignified, Britain points out

THE prime minister’s promise to give everyone “the dignity of a job” has confused Britons whose jobs are a humiliating parade of shame.

The prime minister’s plan for blue-collar conservatism, which has seen his cabinet puzzling their way through Bruce Springsteen’s Born To Run, ignores the facts that most jobs offer all the dignity of greased clowns in a mudpit.

Burger chain employee Stephen Malley said: “I have to wear a hair-net, a beard-net, and a badge showing exactly how well I’m progressing which is why drunks hail me with ‘Oi, one-star, there’s sick on the floor.’

“Barry Chuckle has more gravitas in the workplace than me.”

Marketing manager Carolyn Ryan agreed: “Officially, my job is to sell our company to B2B clients, but actually it’s to dance like a monkey puppet at the behest of my superior.

“Last week he rewrote my presentation so it made no sense and then, when I was halfway through it, stopped me to tell everyone how wrong I was while I stood there like a drooping erection at a Royal garden party.”

Cameron followed up his promise by saying everyone deserves “the pride of a pay cheque”, prompting new employment minister Priti Patel to ask if he had ever heard of BACS payments. 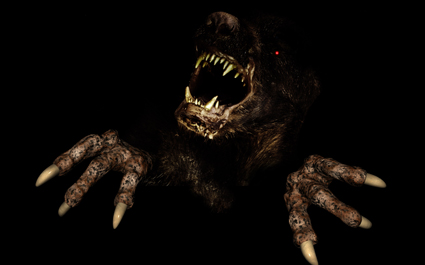 UKIP may try to keep Nigel Farage as leader because its strongest candidate is a humanoid known only as ‘Beast’.

The party is set reject Farage’s resignation after looking at its other options and deciding they were too frightening.

A UKIP spokesman said: “Everyone else in the running looks like something from the Star Wars cantina.

“There is strong grass roots support for ‘Beast’, the man-like carnivore that inhabits the basement of UKIP HQ and is fed on a diet of illegal foreigners.

“However there is concern that Beast’s meat-based agenda may alienate our relatively moderate supporters. But maybe an insatiable craving for human flesh is the breath of fresh air that politics needs.”