Police Cannot Wait To Get Tasers

POLICEMEN across England and Wales could not sleep last night after being told they were going to get electric stun guns.

The Home Office said 10,000 tasers would be issued to forces across the country, causing the Police Federation to jump up and down while holding its privates to stop it from urinating.

"And then he'll be on the ground all jiggling and stuff and the electricity will be all over his body and it'll be all blue and sparky and then his eyes will just, like, pop out of his head and explode!"

According to the Home Office tasers can be used in almost any situation, apart from disabling Brazilian electricians who have 'built up an immunity'.

A Home Office spokesman said: "It will allow frontline officers to confront potentially dangerous suspects with increased confidence and be totally amazing."

He added: "Tasers are better than ordinary guns because they're electric. They're actually a bit like lasers. And who in their right mind is going to want want a gun when they could have a laser?

"Imagine, right, if you had a gun and I had a laser, you could shoot at me and I could, like, use my laser to deflect the bullet and then shoot you. Guns… fuck off."

In a separate announcement the Department of Health has predicted a 100,000% increase in members of the public electrocuted for being cheeky.

Brown To Gamble On You Being Retarded 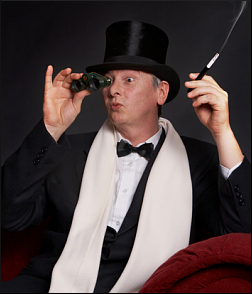 GORDON Brown will today gamble on you buying things you don't need because they are slightly cheaper, and then believing that rich people are going to pay for it all.

In his pre-Budget report, chancellor Alistair Darling will tell the Commons that all you really care about is shopping and telly and that rich people will be still be able to buy their fancy top hats and opera tickets no matter how much tax they have to pay.

He will also claim that raising income tax for Little Lord Fauntleroy and his school chums will plug the £120bn gap in public finances because when he gets the extra £50 notes from all the rich people he can turn them into £5000 notes using a felt-tip pen.

A Treasury spokesman insisted: "If he adds an extra two zeroes and then signs it, it becomes legal tender. It totally does."

A Labour source said: "This is a defining moment for Gordon Brown. This is the moment he reveals not only how stupid he thinks you are but the pure, unbridled contempt in which he holds you.

"If we're right and you are an unbelievable moron then we should go for a general election as soon as possible in case you suddenly decide to read a book or something."

The source added: "The key thing now is to convince you that none of this was our fault and it was all those rich bastards with their fancy china and their plus fours.

"'I say Jeeves, my Daily Telegraph has not been ironed and this smoked salmon has gone orff'. That's totally what they're like, isn't it?"