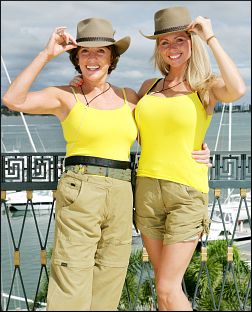 ITV show I'm a Celebrity Get Me Out of Here is to drop its team challenge rounds so that it can focus on lots of wet tits.

Producers say from next year the show will be overhauled to bring together 12 medium to large breasted celebrities who will spend six weeks having bikini-clad showers under a jungle waterfall.

ITV executive Julian Cook said: "We've realised that no-one in their right mind wants to watch Mr Sulu eat a grasshopper when they could be waiting for Dani Behr to just say 'what the hell' and take the bloody thing off.

"There will be new and innovative additions to the format such as lots and lots of soap.

"And, of course, we will occasionally cut back to Ant and Dec giggling and rubbing their hands."

He added: "There's probably not much point in continuing with the current title so we'll probably just call it Tits."

Meanwhile ITV2 will screen a spin-off show Tits.Now where celebrity pundits and a studio audience will discuss the relative merits of pert, cosmetically-enhanced titties and big bouncy funbags.

Tits will be only the third programme in the history of British television to be made primarily for men after Top Gear and Pot Black.