Private investigation 'could be permanently tarnished'

PRIVATE investigators fear that the respectability of their profession may never fully recover following the News International scandal, it has emerged.

Reports of underhand, legally dubious behaviour among its members has prompted a statement from the Esteemed Guild of Freelance Investigators, which was established in 1574 to ensure the prevalence of fair play and honour among the private investigation community.

Guild president Tommy ‘Chub’ Logan, also known as Dan Checker and Morton Appleby, said: “We are forced to defend our venerable profession following a few poor decisions by a tiny minority of our fellows.

“For over four hundred years we have provided a valuable social service by fighting crime. Most especially very complicated crimes involving the beautiful troubled daughters of powerful men, missing gems with quasi-mystical properties and dark family secrets that need to be kept quiet at all costs.

“Often there’s not even any money in it. Maybe just some sex.

“Despite this, last year we donated over £4 million in unmarked notes to children’s hospitals.”

Tommy ‘Chub’ Logan, whose aliases also include Wallis Fig and Emma Bradford, explained: “There’s going to be something for everyone – ‘skip rustling’, which involves getting in skips looking for discarded personal information, ‘wheelie bin rustling’ which is broadly similar but in wheelie bins, and introductory phone tapping for the kids.

“Plus everyone gets a free cigarette with the filter cut off.”

Private investigator Stephen Malley, who runs his unnamed business from a room in a semi-derelict tenement building, said: “I worked for years doing ‘things’ to get where I am today. It’s great being able to help people.

“Especially if those people are corrupt media barons or dames with killer curves and eyes the colour of smoke.”

People still discussing how much they don&#8217;t care about Harper Beckham 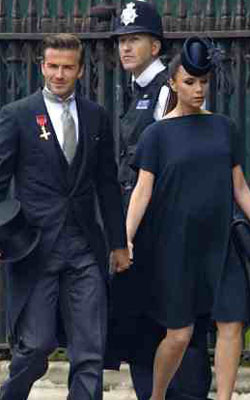 BRITAIN’S tosspots are still chattering away about their total disinterest in David Beckham’s new range of child.

Artisan coffee shops and microbrewery pubs stayed open all last night as the various reasons why it totally wasn’t news were examined in minute detail. The creative sector is expecting a 40% absentee rate today as What This Says About Society continues to be endlessly debated.

Gallery manager and cretin Nikki Hollis said “I can’t believe the papers are going on about this when there’s a war going on…is that right?…and people are like, completely dying in…I want to say Cavonia? Hang on, that’s a cough mixture, isn’t it?”

“When my sister-in-law had a baby last month nobody made a big fuss about it, including myself, but that’s because she’s just a common little bitch who’s ruined my brother’s life. Sorry, what was the question again?”

As sanctimonious shits across the country continued to vent bile about a newborn child they’ve never met on the basis it has famous parents and a slightly silly name, Rupert Murdoch has asked the Beckhams if they can have a new child every two weeks until the BSkyB takeover is approved.

The media Obergruppenfuhrer said “If they can do that and I can get Radiohead to release another awful album, which should be no stretch whatsoever, most of Britain’s pricks will completely forget who I am.”

Meanwhile, the Facebook group “Sign up here to express your lack of interest in Harper Beckham” has grown to 120,000 members who are currently debating when to organise a demonstration in Trafalgar Square.

Nikki Hollis said “I really couldn’t care less whether the Beckhams have had another child and I’m prepared to take the day off work and get a coach down to London to prove it.”