NETWORK problems with the PS3 console have left thousands of level three wizard-knights desperately seeking news from the sacred sky lands of Asgharoth.

Many have pleaded with Xbox owners to forward messages to their made-up loved ones in the fantasy world as Sony engineers work to restore access to their only form of social interaction.

Game moderators have described the mood in the Asgharoth as 'tense, but stable' with only minor instances of unrest and looting amongst the troll community.

Balruzul the Considerable, also known as Martin Bishop from Grantham, said: "The fortress of Benshazar is unguarded, the Qalziel Spider Gem remains lost and the forces of The Shadow Horn mass in my absence. I can't play FIFA online, either.

"I have invested most of my life in becoming a reputable and feared figure in the local Warlock community and without access to the Crystal Sword of Kalrazamel all will be undone, probably by some 12-year-old Korean child with over-developed thumbs."

IT expert Tom Logan said: "There's a problem with the internal clock in some machines which has made them think it's actually 1999, meaning most of the games now look like confusing Eastern European cartoons recreated in Lego.

"Unfortunately this time shift does mean the consoles will have to repeat the Bush presidency and Britney Spears' entire career. And at some point in 2013 they are going to start getting very boring about The Wire."

Balruzul the Considerable added: "This impasse has also got me wondering what my Asgharothian achievements mean in the wider context of the all-too brief spark of consciousness mankind is given on this glittering jewel of a planet.

"Suffice to say it's not going to help with my self-esteem related Pringle bingeing."

Marriage not as good as 'Predator', say men 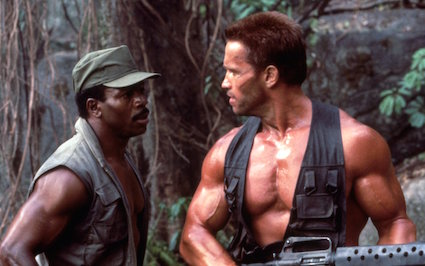 MARRYING a woman who shares your hopes and dreams is still nowhere near as good as Predator, according to a new survey.

A poll of husbands for Bride magazine found that 80% rated the Schwarzenegger epic had higher levels of excitement and intellectual stimulation than a lifetime commitment to some woman.

Nathan Muir, from York, said: “The scene where Arnie looks up from the body of a pal who’s just had several major organs vaporized by a seven foot skull-collecting merchant of death and says – ‘if it bleeds, we can kill it’, sums up what it is to be a man.

Tom Logan, from Finsbury Park, went so far as to have a Predator-themed wedding to wife Jane in July 2001.

He said: “When Jane’s father walked her down the aisle we had the Vicar dress up as Predator, leap out from behind the altar and pretend to slit her throat.

“Fake blood sprayed everywhere and her dad fell to the floor screaming. He didn’t have a clue what was going on. Meanwhile my Nan had some sort of vomiting fit, crossed herself and then collapsed in a heap.”

He added: “We still go and see her about once a month but she’s not really aware of other people anymore.”