CLAMPING someone who sees a no-parking sign and then blatantly ignores it is a breach of their human rights, the RAC has claimed.

The motoring organisation said thousands of drivers are being forced to pay large fines simply because they think they can park their car wherever they bloody well feel like.

An RAC Foundation spokesman said: “Drivers are too busy to read large yellow signs with big, black letters and confusing messages such as ‘No parking – you will be clamped’. What does that even mean?

“It’s typical of these companies to use this kind of gobble-di-gook. If they mean ‘no parking’ just say ‘no parking’. Perhaps with a large yellow sign and big, black letters.”

He added: “And anyway, most of the signs had fallen off, or the drivers had to park there because their grandmother had just died again, or they have a condition which means they have to go to the toilet every 20 minutes or they will, sadly, poo themselves.”

Tom Logan, director of Utter Fucking Bastards Ltd, a London-based clamping firm, said: “I would not be in the wheel clamping business if I was anything other than an utter fucking bastard.

“But in my defence there is a huge yellow and black sign that says don’t park here or we’ll clamp you. 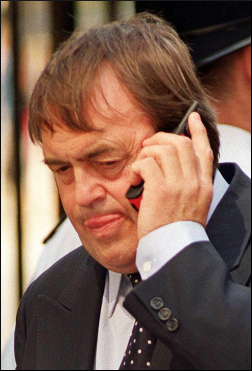 JOHN Prescott’s obsession with chip butties and erection pills are no-one’s business but his own, the former deputy prime minister said last night.

Mr Prescott has contacted the police amid claims the News of the World illegally intercepted dozens of phone calls in which he is heard ordering the ‘key ingredients’ for his extra-marital intercourse sessions.

It is understood the Prescott phone taps reveal a pattern of high-fat gorging which would reach a peak whenever he was regularly mounting one of his secretaries.

According to News International sources, in one call to a fish and chip shop in Pimlico, Mr Prescott said: “I’ll need about 12, I reckon. The wife’s away so I’ve got a busy night ahead of me, if you catch me drift.”

The next day he is heard leaving a message for ‘Steve’ who, sources believe, supplied Mr Prescott with a type of high-strength Viagra used by men who are so fat they are unable to see their own sex organs.

Mr Prescott is heard saying: “Steve, John here. That stuff were magic. I were like fuckin’ Errol Flynn last night. Gonna need a lot more of that. A lot more.”

Intercepted messages from 1999-2001 have been dubbed Mr Prescott’s ‘biscuit and sex jelly phase’ when the deputy prime minister would order van loads of custard creams while cycle couriers dashed across central London with fresh supplies of K-Y.

And in another call to a handyman based near his Dorneywood mansion, Mr Prescott said: “Hello Geoff, it’s the deputy prime minister. Just wonderin’ how yer gettin’ on smoothin’ the bite marks out of me croquet mallet.

“I know I’m not supposed to eat them but it looked like a Swiss roll on a stick. Gimme a shout.”