MOTORING taxes may have been used to fund non-transport related expenditure such as great big moats, according to a new report.

A cross-party committee of MPs said that in recent years vehicle excise duty and congestion charges may some how have found their way into the big pot that is normally used for making their houses nicer.

Chairman Lousie Ellman said: "We could not actually find any evidence of motoring taxes being used to make the country's transport system any better. In fact it does now seem we may have spent it all on moats and tellies."

In recent years the government has increased car-related taxation with the promise that it would be ring-fenced and used to build a floating, hypersonic train that would stop outside your bedroom door.

But concerns were raised after some people noticed the existing rail system was now worse than that of 19th Century Burma, while much of the M1 looks like those photos of the road to Basra at the end of 1991 Gulf War.

The department of transport insisted it had used some of the moat money for transport projects, including an electric hovercraft from Windermere to Ambleside and more than three million miles of breathtakingly pointless cycle lanes.

A spokesman said: "We even put a cycle lane around Douglas Hogg's moat so that his moat cleaner could cycle around the moat, skimming leaves off the surface without having to emit gas."

Bill McKay, a Volvo driver from Stevenage, said: "So road taxes are not used to make the roads better? I'm so glad you told me because that would never have occured to me in a billion fucking years."

Huge Increase In People Who Have Totally Got Swine Flu 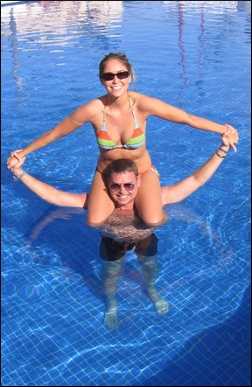 THE number of people who have totally got that swine flu thing is set to explode over the next few days, it was claimed last night.

Within hours of the government replacing England's 30,000 GPs with a website, experts said new cases would rocket, especially as people were now able to tell lies to a computer in return for two weeks off work.

Professor Henry Brubaker, of the Institute for Studies, said: "Now that people are officially diagnosing themselves, it is very likely the number of cases will soon match the exact number of people in the country.

"At that stage we are legally obliged to come up with a new type of 'demic'. I have expressed my support for 'ultra-demic' while my colleague Brian favours 'rama-lama-demic', but he is a huge Little Richard fan."

Emma Bradford, from London, said: "I have definitely got it because my Blackberry said so. I shall be collecting my Tamiflu from the chemist and then taking advantage of a last minute recuperation deal to Menorca."

Tom Logan, from Finsbury Park, said: "I would say I'm about 30% sure I'm not feeling well, but I'm 100% sure that I have just come up with a copper-bottomed reason to extend my summer holidays.

"The website is far too complicated. They should just replace all the symptom related questions with 'would you like two weeks off work?'."

He added: "Obviously you don't have to take the pills, but from what my Blackberry tells me there can be some really freaky side effects. I've decided to mix mine with schnapps and Dubonnet and resurface towards the end of August."

Meanwhile a doubling of the number of actual swine flu cases in the last week has led doctors to believe it may be some sort of infectious disease.

A British Medical Association spokesman said: "It does now seem to be spreading from person to person, much like a typical virus, which certainly puts paid to our theory that it's caused by bad dreams."