A MARITAL argument has turned unexpectedly ugly after a man told his wife she was ‘like Brexit’.

The argument between 31-year-old Joseph Turner and wife Carla began over a pair of shoes, but has now expanded to cover the UK’s exit from the European Union and its economic ramifications.

Joe Turner said: “You’re like fucking Brexit, you are. All big talk and promises but when the bills come you’ve got no fucking money.

“One minute we need to take back control and remortgage the house, the next you’d always said that we might have to sell my motorbike. Fucking Brexit.”

Carla replied: “How dare you call me Brexit. You’re Brexit.

“You’re always like ‘I’m gonna do something really stupid now because I’m in a bad fucking mood, and then I’ll refuse to admit it was a dickhead idea’. Totally Brexit.”

The couple made-up two hours later after realising that no matter how bad things are at least they are not Scottish.

I'm not particularly good with numbers, admits Chancellor of the Exchequer 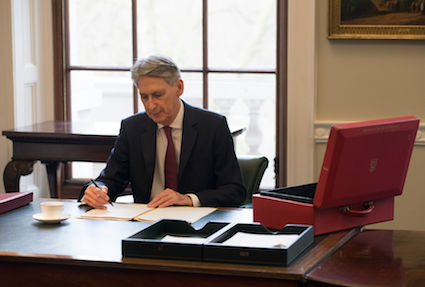 THE Chancellor of the Exchequer has conceded that ‘numbers, money, that sort of thing’ are not his strong point.

After scrapping a central plank of his Budget within a week, Phillip Hammond said he found large numbers ‘quite intimidating’ and would be ‘much happier running the department that looks after farms and stuff’.

He added: “I like farms and I like farmers. I like animals and the countryside and tractors. As long no-one asks me to count the tractors, or the animals, because that would be a nightmare.

“I’m going to ask for a transfer to the farm department, but in the meantime I’ll just stay here at the Treasury, avoiding anything that looks like arithmetic.

“Being Chancellor is not a particularly important job anyway as all the ‘economic numbers’ tend to look after themselves. Especially the very large ones.

“I have to say, it does help that we’re in the European Single Market what with all the trading and the jobs and stuff. It means I don’t really have to pay attention most of the time.”